A top-order player for is his domestic side, de Silva is yet to find a stable position in the Sri Lankan batting line-up.

Sri Lanka will open their Asia Cup 2018 campaign against Bangladesh in the tournament opener at the Dubai international Stadium, Dubai and allrounder Dhananjaya de Silva feels that no team can be taken lightly.

Sri Lanka are in Group B consisting Bangladesh and Afghanistan.

There are some good sides (in the tournament), said de Silva ahead, adding, Especially Afghanistan, they have some big names like Rashid (Khan) and Mujeeb (Ur Rahman) and we have a big task ahead of us.

Personally, for the 27-year-old allrounder Asia Cup 2018 presents the opportunity to seal his place in Sri Lanka s limited-over setup. He was left out of Sri Lanka s ODI plans after the ICC Champions Trophy in 2017, but made a return in the series against South Africa played three ODIs, in which he impressed scoring at an average of 41.33 and took two wickets.

A top-order player for is his domestic side, de Silva is yet to find a stable position in the batting line-up. He has mostly batted at No.6 and 7 during his short 20-ODI series, but he says that this his role has been defined with the team management hoping that the 27-year-old contribute both with the bat and ball.

My coaches have been saying that I have to bowl a few more overs and bat through the innings. so I need to prepare for that and I am looking forward to it, said de Silva, who has 459 runs at an average 27 in 20 ODIs to go with his six wickets.

After playing Bangladesh, Sri Lanka will face Afghanistan with the top two team from the group moving on to the Super 4s and he reckons each game will be important.

We have to go game by game and execute our plans in the middle throughout the tournament, he added.

Earlier this year in May, de Silva withdrew from the Sri Lanka s tour of the West Indies after his father, a local politician, was shot dead by unidentified gunmen on the eve of the national team’s departure to the West Indies. 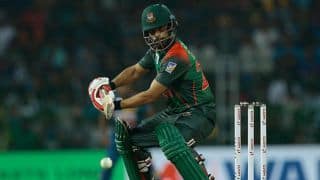