Jadhav picked up the crucial middle-order wickets, including that of skipper Sarfraz Ahmed, Asif Ali and Shadab Khan.

Indian captain Rohit Sharma appreciated Kedar Jadhav for his contribution with the ball in India s emphatic eight-wicket win against Pakistan on Thursday. Jadhav picked up the crucial middle-order wickets, including that of skipper Sarfraz Ahmed, Asif Ali and Shadab Khan as Pakistan crumbled to 162 all out.

“He (Jadhav) has been working on his bowling, takes his bowling very seriously,” Rohit said during the post-match presentation. “Every now and then, he has come and done the job for the team which augurs well. Bowling those crucial overs and taking wickets are bonuses for us. Especially when Hardik got injured, it was important for him to carry on and put the team into the right track.”

That India successfully chased down 163 was majorly because of an 86-run stand between Rohit and Shikhar Dhawan for the opening wicket. India needed to watchfully bat out the first 10 overs and see off the new ball against the likes of Mohammad Amir and Usman Khan. From 17/0 in six overs, Rohit took charge and scored his quickest ODI half-century off 36 balls. Even as India lost both Rohit and Dhawan in quick succession, Ambati Rayudu and Dinesh Karthik took India over the line with 126 balls remaining.

“Quite enjoyed the little innings that I played, got out to a great delivery,” Rohit said, referring to Shadab Khan’s googly that dismissed him. “Was important for us to come here and adjust. We haven’t played here much and the two games that we have played now, we have understood how to create partnerships and achieve targets that we have set for ourselves. Opening partnership sets the platform for the rest to come and play freely, do their job. It was a fantastic finish by Dinesh and Rayudu as well.”

Rohit pointed out that it was important for India to learn from the Hong Kong game a day earlier. India narrowly beat the Associate nation by 26 runs, but they went 34 overs without picking up a wicket, before the bowlers staged a comeback and averted the possibility of a major upset.

“Right from the start, we were quite disciplined. We wanted to learn from the mistakes which we made in the last game,” said the Indian captain.

“Today was a great game for the bowling department because I knew the conditions weren’t great for it. But we kept the conditions aside and did the job. We stuck to our plans. Lot of improvement from the last game, spinners kept it tight, got the odd breakthroughs. The bowlers took wickets early as well, in the first 10 overs which was magnificent. (On the early wickets) It was important to do that because they have quality in there, some of their guys have been scoring heavily.

“We wanted to make sure not to make things easy for them. We spoke about not giving room to the batsmen which was critical on this pitch where they can free their arms. The first few overs were disciplined, and the spinners took on from there. Once they had Babar and Malik, they had a partnership, we discussed that there is no need to panic, partnerships can happen. It was important for us to just stick to the plans which the guys did.”

Bhuvneshwar Kumar was the pick up the bowlers for India with 3/15 from seven overs. Living up to his reputation of providing early breakthroughs, the medium pacer removed Pakistan s openers Imam ul Haq and Fakhar Zaman in successive overs. Later, with Faheem Ashraf and Mohammad Amir resisting, Bhuvneshwar broke the partnership in the death as Pakistan were bowled out inside 45 overs.

“Always need initial wickets to get any team to a low total. It was a great bowling effort,” Bhuvneshwar, who was named Player of the Match, said.

“Great to see Jadhav step up in the absence of Hardik Pandya. On a track where the ball doesn’t swing, that’s the only thing you can do. It’s important to bowl back of a length and try to hit the stumps, give yourselves a chance. Key is not to give too many runs and force the batsmen to make mistakes. That’s the best way to get them out.” Asia Cup 2018: Prepared for Kuldeep Yadav, Yuzvendra Chahal, but Kedar Jadhav got to us: Sarfraz Ahmed 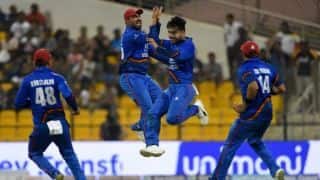