UAE thrashed Nepal by a convincing 78-run margin at Kinrara Academy Oval, Kuala Lumpur in the 2018 Asia Cup Qualifiers. Asked to bat, UAE, powered by Ashfaq Ahmed (41), Chirag Suri (65), Rameez Shahzad (35), and Adnan Mufti (57 not out) had put up 254 for 9 against a rampant Sandeep Lamichhane (10-2-24-4). In response, Nepal crashed to 176. With two defeats in two matches (they had lost their tournament opener against Oman yesterday), an Asia Cup berth seems distant for Nepal at this stage.

Mohammad Naveed got Gyanendra Malla early when Nepal batted. However, the big fish was snared by Ahmed Raza, who deceived Paras Khadka and had him stumped with his left-arm spin. Subash Khakurel (54) and Dipendra Airee (40) took the score to 101 for 3, but Raza (10-1-37-4) kept striking at regular intervals.

Hong Kong defeated Singapore easily at Bayuemas Oval, Kuala Lumpur. Their left-arm spinner Nadeem Ahmed (8.2-2-30-4) led the rout as Singapore were bowled out for 150. Singapore reduced Hong Kong to 19 for 2 before the stipulated lunch hour, but Babar Hayat and Nizakat Khan added 61 for the third wicket to put the Hong Kong chase on track. Kinchit Shah and Aizaz Khan ensured a quick finish, with an unbeaten 47-run stand in 43 balls.

Hosts Malaysia played the most intense match of the day, against Oman at UKM-YSD Cricket Oval, Bangi. Both sides had felled a mighty opposition in their respective first matches. Oman put Malaysia in here, and quickly reduced them to 38 for 3 in the 15th over. Then Virandeep Singh batted through the rest of the innings with 74 not out, adding 49, 52, and 38-run partnerships to lift Malaysia to 198 for 8. Bilal Khan and Fayyaz Butt picked up three wickets apiece.

Oman stuttered several times during the chase, especially against the leg-breaks of Abdul Rashid (10-1-30-4). However, as Rashid bowled through, Mohammad Nadeem and Ajay Lalcheta led a slow recovery from 107 for 5.

Then, just when it seemed Oman would seal it, left-arm spinner Muhammad Anwar trapped Nadeem and wicketkeeper Naseem Khushi leg-before in quick succession. At the other end, Pawandeep Singh took out Fayyaz.

Anwar bowled the last over, off which Oman needed six, and Lalcheta (who finished with 44 not out) was off strike. However, Bilal sealed things with a second-ball six. 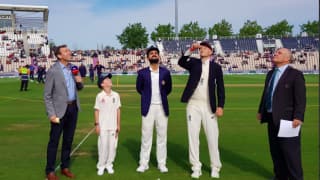