Sandeep Lamichhane (10-2-24-4) stole the show for Nepal in the first session of the Asia Cup 2018 Qualifiers, at Kinrara Academy Oval, Kuala Lumpur. These are now the best ODI figures for Lamichhane. He bettered his captain Paras Khadka‘s 10-0-26-4 against Netherlands, earlier this month.

However, Adnan Mufti (57 not out in 46 balls, 8 fours) hit out towards the end to take UAE to 254 for 9. Just as they did yesterday, Ashfaq Ahmed (45 in 41 balls) and Chirag Suri (65 in 91) were off to a great start, adding 70 in 73 balls for the first wicket. However, Lamichhane got captain Rohan Mustafa immediately after Basant Regmi trapped Ashfaq leg-before.

The UAE batsmen saw Lamichhane away, opting to score at the other end instead. Lamichhane got Shaiman Anwar as well, but Khadka let the game drift away, holding Lamichhane’s tenth over back (he had figures of 9-2-22-2 at this stage). Taking advantage, Mufti added a crucial 28 with Abdul Shukoor.

Lamichhane returned in the 45th over and took wickets with the fourth and fifth balls before Ahmed Raza prevented the hat-trick. Raza held the fort as UAE plundered 42 in the last five overs.

Hong Kong had a better day under the sun against Singapore, at Bayuemas Oval, Kuala Lumpur, after they were stunned by hosts Malaysia yesterday. Singapore were quickly reduced to 25 for 4 (and later 86 for 7) before Abhiraj Singh (42) and Aryaman Sunil (28) added 50 for the eighth wicket. Abhiraj was last out, in the 42nd over.

Left-arm spinner Nadeem Ahmed (8.2-2-30-4) hurt Singapore the most, with two wickets apiece, though the new-ball bowlers Tanwir Afzal and Ehsan Nawaz did the initial damage.

In response, Amjad Mahboob and Aryaman took out the Hong Kong openers inside the first two overs. At lunch, Hong Kong need 132 in 46 overs with eight wickets standing.

At UKM-YSD Cricket Oval, Bangi, Malaysia recovered from 39 for 3 in the 15th over to post 198 for 8 against Oman. The turnaround was led by Virandeep Singh, who finished on 74 not out. Virandeep added 49 with Suharril Fetri, 52 with Syed Aziz, and a further 38 with Muhammad Anwar. Bilal Khan (10-2-28-3) was the pick of the bowlers. 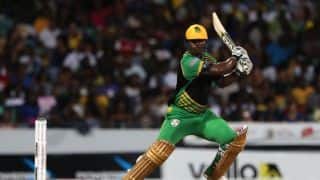 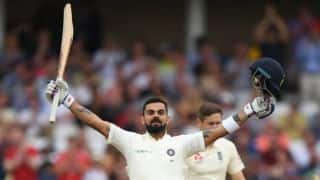