Jadeja had shepherded the tail until only one was needed off two balls before Rashid had him out caught in the deep.

Afghanistan continue to punch above their weight in the 2018 Asia Cup. After a spirited showing that almost got them home against Pakistan the other night, they dished out yet another inspiring performance which produced a dramatic last-over tie against India in the penultimate Super four match of the tournament.

Ravindra Jadeja had shepherded the tail bravely to narrow the equation down to seven required off six. After refusing a single off the first ball, Jadeja smoked the next ball towards deep midwicket that seemingly hit the rope cushion on the full, but after repeatedly replays was ruled a boundary by Rod Tucker. Jadeja took a single off the next ball exposing Khaleel Ahmed, who saw off a googly to give the strike back to his senior partner.

With one needed off two, Rashid Khan, Afghanistan cricket s superstar, had Jadeja out caught to the only fielder in the deep. No provision of a super over meant that India remain unbeaten heading into the final on Friday. As for Afghanistan, they would head home proud of the fact that they did not lose to the No.1 ranked side in the world.

They didn t deserve to, especially the way Mohammad Shahzad and Mohammad Nabi had earlier batted to give Afghanistan a total of 252/8, and for the sheer character their bowlers showed to restrict India to 242/8 after the opening pair of KL Rahul and Ambati Rayudu had knocked off 100 runs inside 15 overs. They scored at over six an over, raising hopes of an early finish. However, the way Afghanistan came back post the wicket of Rayudu, is a testament to how far the team has come since their last Asia Cup campaign in 2014.

Playing his first game of the tournament, Rahul began by slapping the first ball of the innings to the boundary. But he would take the backseat soon as Rayudu brought back memories of his season with Chennai Super Kings earlier this year. Surviving a close LBW shout off Mujeeb Ur Rahman, he was off the blocks. Aftab Alam was walloped for a six and Mujeeb was taken for two boundaries in the seventh over. He went on to smack three more sixes to bring up his fifty off 43 balls.

At the other end, it was almost as if Rahul was continuing from his century at the Oval. The two put together 110 in 17 overs before Nabi provided the breakthrough. Rayudu skied one and was smartly taken near the boundary. Three overs later, Rahul played an ambitions reverse sweep off Rashid and was given out leg before wicket.

India would rue Rahul s decision to review his dismissal. It could have been used to save MS Dhoni. Manish Pandey perished to a lazy stroke and it left India effectively four down for 56. Dinesh Karthik, batting carefully, was boosted by the arrival of Kedar Jadhav. Karthik had cracked a couple of boundaries in one over but was tied down as the spinners settled in. Still, he and Jadhav forged a 38-run stand, during a period that saw India going six overs without a boundary.

Afghanistan found their biggest opening of the match when they removed both set batsmen in a span of five balls Karthik falling victim to another horrible call by umpire Gregory Brathwaite. The pair of Jadeja and Deepak Chahar was India s last hope, and when the debutant was cleaned up by Alam, it signalled the end of the innings. Kuldeep Yadav and Jadeja put on 16 more, before two wickets in a span of five balls added more drama towards the end.

After Afghanistan had opted to bat, Shahzad entertained with a fifth ODI century. Nabi s 64 was equally crucial, although India bowled supremely in the last three overs to concede just nine runs.

India had rested the crux of the team that had registered emphatic wins against Bangladesh and Pakistan, which meant Dhoni was back leading the side after 696 days. Shahzad started off with a streaky boundary off Khaleel towards third man in the first over before rattling Chahar with a 17-run over.

Shahzad was dropped on 49 at mid-off and successfully reviewed a caught behind decision on 93. He had reached his half-century off 37 deliveries before India struck back. The introduction of Jadeja and Kuldeep saw Afghanistan lose four wickets in four overs. Jadeja removed Javed Ahmadi and Rahmat Shah in consecutive overs before Kuldeep sent back Hashmatullah Afridi and skipper Asghar Afghan for ducks off consecutive balls.

Shahzad slowed down as he approached the three-figure mark. A flick towards fine leg finally got him there. During his innings, Shahzad forged two vital partnerships 48 each with Gulbadin Naib and Nabi until he departed to Jadhav having struck 11 fours and seven sixes.

Nabi took over the proceedings and registered a half-century off 45 balls. He took Kaul for three sixes and Kuldeep for 17 runs in the 42nd over. Jadeja returned for his third wicket and broke the ominous-looking stand between Nabi and Najibullah. With almost no loose deliveries on offer, Nabi perished in the 48th over, but Rashid and Alam clawed to take Afghanistan beyond 250. When you tie a match with a side like India, it's just like a win: Asghar Afghan 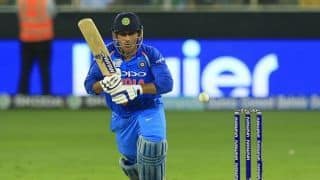