Shahzad s century was his and Afghanistan s first against a top cricket-playing nation, but Nabi s 64 was equally crucial as it helped set the ball rolling in the final overs.

Afghanistan continue to punch above their weight in the Asia Cup. Opener Mohammad Shahzad struck a fifth ODI century, and with assist from experienced campaigner Mohammad Nabi, set the spine of Afghanistan s 252/8 in their Super four match against India. Shahzad s century was his and Afghanistan s first against a top cricket-playing nation, but Nabi s 64 was equally crucial as it helped set the ball rolling in the final overs. India however, bowled supremely in the last five overs to concede just 24.

India had rested the crux of the team that had registered emphatic wins against Bangladesh and Pakistan, which meant MS Dhoni was back leading the side after 696 days. Asghar Afghan opted to bat and Shahzad was on the money from ball one. He started off with a streaky boundary off Khaleel Ahmed towards third man in the first over before charging down to Deepak Chahar in the second. The rattled debutant conceded 17 off an over that conceded a beamer, two wides, one six and two fours.

Shahzad survived a couple of close shouts. He was dropped on 49 at mid-off and successfully reviewed a caught behind decision. Shahzad reached his half-century off 37 deliveries before India struck back. The introduction of Ravindra Jadeja and Kuldeep Yadav saw Afghanistan lose four wickets in four overs. Jadeja removed Javed Ahmadi and Rahmat Shah inconsecutive overs before chinaman Kuldeep sent back Hashmatullah Afridi and skipper Asghar Afghan for ducks, leaving him on a hat-trick.

Despite losing four partners, Shahzad didn t curb himself. He was severe on the pacers and moved around in his crease to unsettle Jadeja. Kuldeep was the only bowler he showed respect yet picked his variations well. Shahzad did slow down as he approached the three-figure mark, but a flick towards fine leg got him there.

Through his innings, Shahzad forged two vital partnerships 48 each with Gulbadin Naib and Nabi, that denied India to knock the door down. Shahzad didn t stop even after his century, toking Chahar for another six and a four off Kedar Jadhav, before the offspinner extracted revenge by getting Shahzad to miscue his first big hit. By the time he departed, the opener had smacked 11 fours and seven sixes.

India though, would have no reprieve. Nabi took over the proceedings from Shahzad and registered a half-century off 45 balls, showcasing a wonderful exhibition of batting. He took Siddharth Kaul for three sixes overs and Kuldeep conceded 17 runs in the 42nd over. It gave Najibullah the confidence, and he chipped in with a run-a-ball 20.

Jadeja returned for his third wicket and broke the ominous-looking stand. That allowed India to pull things back. With almost no boundary-offering ball on offer, Nabi perished in the 48th over, after which Afghanistan Rashid Khan and Aftab Alam took Afghanistan over the 250-mark. 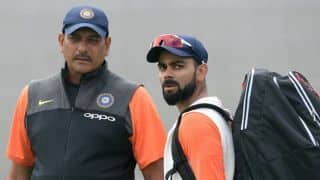