India will hope that Virat Kohli and Shikhar Dhawan take them to a winning position from here.

Rohit Sharma has been dismissed a 5-ball 1 in the Asia Cup T20 2016 final against Bangladesh. Bangladesh managed to score 120 in their 15 overs and will look to pick up a few wickets in the next couple of overs to claw their way back in this match. Rohit has looked in good touch throughout the series will be disappointed with the way he has lost his wicket. But it is a moment to rejoice for Bangladesh as they have gotten rid of the man in form. Dhawan will look to guide India to a win from here, but he has not been in good in this tournament so far.Live Cricket Scorecard: India vs Bangladesh, Asia Cup T20 2016 final

Virat Kohli is the new man for India and he too has been in excellent touch in this Asia Cup. Bangladesh will have their tails up now and will be looking to get a few more wickets in the next few overs. This has been an excellent start for Bangladesh and they will look to consolidate a bit more from here. Live Updates: India vs Bangladesh, Asia Cup 2016 Final IND vs BAN at Mirpur

India has earlier won the toss and elected to bowl first. This match had been reduced to 15 overs a side after the rain had delayed the toss in the initial stages. Mahmudullah and Sabbir Rahman were stars with the bat for Bangladesh as they got their side to a respectable total. ndia welcomed back Ashwin, Jadeja and Nehra back into the playing XI after they were rested in the previous match. Bangladesh too made a couple of changes to their playing XI with the likes of Nasir Hossain and Abu Hide featuring in the side. This is the second time Bangladesh are playing in a final of an Asia Cup, having lost the final in 2012 against Pakistan. India on the other hand have won the tournament five times. 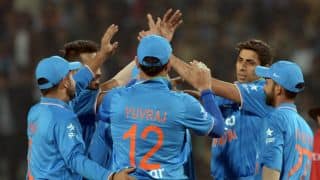