India rang in five changes, with skipper Rohit Sharma rested and MS Dhoni handed the responsibility to lead the side in his absence.

For their last Super 4 match of the Asia Cup against Afghanistan, India rang in five changes, with skipper Rohit Sharma rested and MS Dhoni handed the responsibility to lead the side in his absence. Dhoni, leading India for the 200th time lost the toss which allowed Asghar Afghan to bat first.

Rohit s opening partner Shikhar Dhawan, pacers Jasprit Bumrah, Bhuvneshwar Kumar and legspinner Yuzvendra Chahal were among those to have been rested, providing the players some much-needed rest ahead of t the final on Sunday.

Fast bowler Deepak Chahar was handed his ODI cap by coach Ravi Shastri, making him the 273rd player to represent India in one-day internationals. Dhawan s absence means that KL Rahul gets his first game of the tournament. Siddharth Kaul also returns to the fold having played two ODIs against England in June. Taking his place in the side as the third seam bowler will be Khaleel Ahmed, who had debuted against Hong Kong in India s first game of the tournament and returned figures of 3/48.

Afghanistan made a couple of changes as they try to advance into the final. Najibullah Zadran and Javed Ahmadi come in for Samiullah Shenwari and Ihsanullah Janat.

“It is important for them to adjust to the line and length they need to bowl. I was not really sure of where I am standing. I have captained 199 ODIs, so this gives me an opportunity to make it 200. It’s all destiny and I have always believed in that. It’s not in my control, once I left captainship. Good to complete 200, but I don’t think it really matters.”

Asghar, captain of Afghanistan, said: “We will bat first. Today, the wicket might spin. We would like to put runs on the board and apply pressure. We have made two changes. Samiullah and Ihsanullah are not playing. Najibullah and Javed Ahmadi come in. We played well, but we lost two games. It’s part of the game. Today we will look to play confidently.” 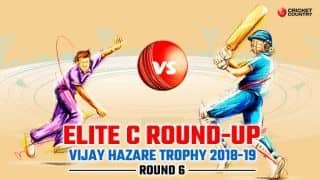 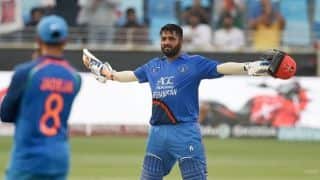