Darren Bravo pulled out of the tour to South Africa due to personal reasons.

Left-handed batsman Assad Fudadin was on Friday called-up to replace Darren Bravo in the West Indies Test squad to tour South Africa in December and January. Bravo, who had been offered a contract for the series, pulled out of the tour, citing personal reasons and requested that he not be considered for selection. Fudadin, 29, from Guyana, has played three Tests in 2012 against England and New Zealand.

The series against South Africa will be the first for the West Indies since they quit India four matches into a five-game, one-day series in October after a pay dispute between players and the board, with a T20 International and three Tests to play. The West Indies Cricket Board has since set up a task force to explore the controversy with a report due on December 18. George Bailey does not expect Test recall for series against India 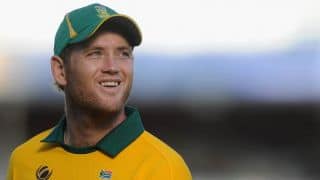