Ireland has been victorious in four editions of the ICC Intercontinental Cup.

Dubai: The dream of associate nations to play Test cricket in all likelihood will turn into a reality as the emerging nations compete against each other in the ICC Inter-Continental Cup 2015-17 that is scheduled to start with encounter between Namibia and Hong Kong from May 10-13.

According to a press release issued by the ICC, the four-day First-Class fixtures will feature countries like Afghanistan, Hong Kong, Ireland, Netherlands, Namibia, Papua New Guinea (PNG), Scotland and the United Arab Emirates (UAE). The side that wins the round-robin league will play the bottom-ranked Test team on the Reliance ICC Test Team Rankings in the ICC Test Challenge in 2018.

ICC Chief Executive David Richardson said:”The ICC Intercontinental Cup is now the platform for emerging nations to fulfill their ambitions of playing Test cricket. It will therefore be fantastic to see the strongest Associates face off in an exciting competition, with great context, that will showcase world cricket?s growing pool of talent.

“This event, funded by ICC, forms part of the ICC’s global development programme. As preparations intensify ahead of the opening round in Namibia this weekend, I would like to wish all of the competing nations the best of luck,” he was quoted as saying in the media release. Scotland won the inaugural ICC Intercontinental Cup in 2004, beating Canada in the final, while Ireland has been victorious on four occasions (2005, 2006-07, 20007-08 and 2011-13), and Afghanistan clinched the 2009-10 tournament. 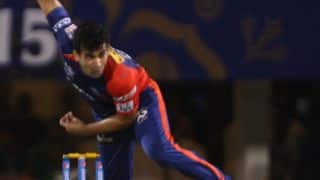 Mumbai Indians vs Delhi Daredevils: Lendl Simmons dismissed for a duck by Zaheer Khan in match 39 of IPL 2015