Lyon snared five wickets, including dangerous half-century makers Masood and Shafiq, as Australia wore down a stubborn Pakistan to clinch the second Test and wrap up the series 2-0.

Veteran off-spinner Nathan Lyon picked up a five-wicket haul as Australia thumped Pakistan to registered another convincing victory in the second and final Test by an innings and 48 run at the Adelaide Oval on Monday. Shan Masood and Asad Shafiq scored gritty half-centuries to take the Test as deep as possible but in the end their efforts seemed futile.

Courtesy this win, the Aussies clinched the two-match series 2-0 and increased their victory tally in Day-Night Tests to 6-0. Pakistan, who were bundled out for 302 in their first innings in reply to Australia’s 589/3 declared, couldn’t last long in their second innings either as they got bowled out for 239 in the 82nd over on day 4.

Apart from Masood (68) and Shafiq (57) contribution, wicketkeeper-batsman Mohammad Rizwan also played a good hand of 45. However, their efforts couldn’t save Pakistan from the inevitable as they failed to make Australia bat again.

First innings centurion Yasir Shah failed to do much with the bat in his second outing and returned back to pavilion for 13. Babar Azam, who missed the three-figure mark in the 1st innings by three runs could only manage to add 8 to his tally.

Australia opener David Warner is Player of the Match for his sensational triple hundred! 👏#AUSvPAK pic.twitter.com/biGHUrkxSl

Lyon starred with the ball in the second innings as he returned with figures of 5/69 while Josh Hazlewood and Mitchell Starc scalped three and one wicket respectively.

Opener David Warner, who played a record-breaking knock of unbeaten 335, was adjudged the Player of the Match. He amassed 489 runs in the two innings he played in the series and was fittingly named the ‘Player of the Series’ as well.

Mitchell Starc was the destroyer in Pakistan’s first innings, taking 6/66 to reinforce his position as perhaps the best pink ball bowler in the world.

The hosts had won the first Test by an innings and five runs at The Gabba in Brisbane.

Apart from few positives aside, it turned out to be a disappointing tour for Pakistan as they failed to register a win in the five matches (three T20Is and two Tests) they played Down Under.

Australia will now host New Zealand for a three-Test series beginning December 12 while Pakistan will be playing against Sri Lanka in two Tests back home. 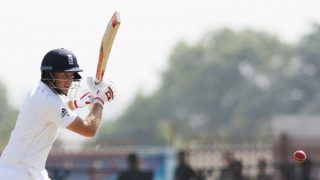