The imminent second new ball is the trump card up Australia's sleeve as they attempt to battle their way back into the rain-hit first Test against South Africa, coach Mickey Arthur said Saturday. 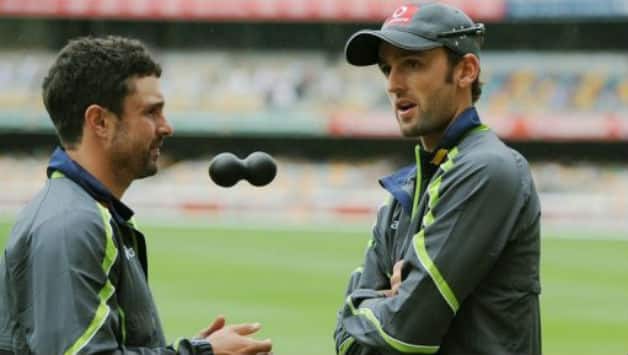 The imminent second new ball is the trump card up Australia‘s sleeve as they attempt to battle their way back into the rain-hit first Test against South Africa, coach Mickey Arthur said Saturday.

He spoke as the entire second day was washed out with the top-ranked Proteas in the box seat at 255 for two after a strong opening day, with Hashim Amla (90*) and Jacques Kallis (84*) nearing centuries.

It was the first time in 29 years that a full day’s play had been rained off at the Gabba ground since the final day of Australia’s second Test with Pakistan on November 29, 1983.

Arthur, who was South Africa’s coach when the Proteas pulled off an historic 2-1 series win over Australia on their last tour there in 2008-09, said Australia would have to turn around an indifferent opening day to salvage the match.

“We first have to get seven wickets now. There’s been a huge chunk of the game taken away,” Arthur said.
“We’ve still got to play very, very well to give ourselves an opportunity to win it, and if we can’t win it then make sure we don’t lose it. There’s a massive amount of cricket still to be played, so it’s a bit premature to be talking about what we’re going to do.”

Despite his reluctance to talk tactics Arthur pointed to bowling with the second new ball, which skipper Michael Clarke attempted to take before play was ended early on Friday due to bad light.

He said Australia had bowled too short and missed the opportunity to put the South African batsmen under pressure on Friday’s first day. “It probably wasn’t good enough and we’ve discussed it at length,” he said.

The Proteas suffered a significant blow overnight with confirmation that JP Duminy would no longer play in the series after his mishap while kicking a rugby ball in a team warm-down exercise late Friday.

Duminy’s loss poses an immediate problem for the Proteas, who went into the first Brisbane Test without a recognised spinner after preferring seamer Rory Kleinveldt to leg-spinner Imran Tahir in an all-pace attack.
Duminy’s off-breaks would have come in handy to add balance to the South African bowling attack, which will be spearheaded by Dale Steyn, Vernon Philander, Jacques Kallis and Kleinveldt.

“It’s really disappointing for JP. He’s obviously an unbelievably talented cricketer and to see a guy get injured and be out for six months is a tragedy,” Arthur said.

“I feel really sorry for him. Our thoughts go out to JP and I’m sure in six months’ time he’ll be fit and raring to go again.