Openers Joe Burns and Usman Khawaja scored centuries, and were backed up by Gurinder Sandhu and Adam Zampa's four wickets.

If Australia A’s innings was characterised by a cushion of options to bat through the innings, India A’s reply was characterised by the paucity of it. There were handsome boundaries scored, and even powerfully hit sixes, but the batsmen who looked like taking the chase on their shoulders kept getting dismissed after showing promise, to leave the home side tattered by the second half of the chase, of 335 in Chennai. Unmukt Chand, the captain, and Kedar Jadhav, the Maharashtra batsman, scored impressive half-centuries, but fell soon after reaching their personal landmarks. While Chand was undone by a flipper from Adam Zampa, a ball after he hit a six through midwicket, Jadhav fell trying to complete an attacking stroke, caught at the boundary at a precarious time, to have the seventh wicket fall. India A eventually folded for 215, losing the second A-team tri-series match by 119 runs. LIVE UPDATES: India A vs Australia A, Triangular Series 2nd match at Chennai

In the initial overs, the openers Chand and Mayank Agarwal began slowly but confidently, with Agarwal stroking elegant boundaries. Soon after, he cut a ball fiercely, but straight to the point fielder.  Manish Pandey lost his wicket through a leading edge that provided an easy catch to Usman Khawaja at midwicket, and No. 4 Karun Nair departed by repeating Agarwal’s mistake, handing a cut to backward point this time.

But aid all this, Chand was playing serenely at the other end. He had hit seven stylish boundaries, and reached his fifty with a smash off a low full-toss for a six, off legspinner Zampa. But he couldn’t negotiate the bowler’s faster delivery, going back to defend a ball on the off stump, and couldn’t prevent the ball from disturbing the stumps. There was still hope left, as Jadhav looked solid in his brief partnerships with Sanju Samson and Akshar Patel, who were both claimed cheaply by right-arm seamer Gurinder Sandhu. READ: Joe Burns and Usman Khawaja lead Australia A to 334 for 4

But Jadhav departed after getting to his fifty, as he ploughed through a testing and precarious period with Patel patiently. He became Zampa’s first victim, caught at the boundary, and with his wicket fallen, it was clear the responsibility to stay through the chase has failed for the batting order. Dhawal Kulkarni and Karn Sharma provided some entertainment with lusty hits — three wickets between them — but it was too little, too late.

Sandhu scythed through the middle order with four wickets, and Zampa also took four, including those of the set Chand and Jadhav, to help give Australia A their second victory in two games in this A-team triangular series. The base of the win was given by a dominant innings of 154 fom Joe Burns, and a century from captain Usman Khawaja. 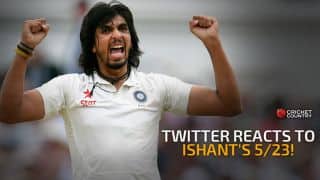 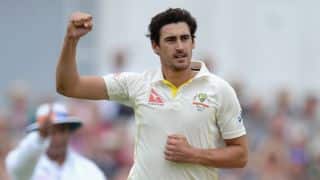