Australia A's bowling attack, headed by James Pattinson, have also looked in total control in both the matches.

Chennai: With a well settled batting unit and an attacking bowling line-up in their rank, a rampaging Australia A will look to continue their good run when they take on South Africa A in the fourth match of the one-day cricket Tri-Series here on Monday. Australia A, led by Usman Khawaja, had started their campaign with an easy nine-wicket win over South Africa and then defeated India A by 119 runs. Their top order has been on song with Queensland opening batsman Joe Burns and captain Khawaja stitching some solid partnerships in both the matches, forming a bulwark against the new ball.

Australia A’s bowling attack, headed by James Pattinson, have also looked in total control in both the matches so far with Gurinder Sandhu and Adam Zampa also picking up four wickets each against India A. The positivity and their method of planning and execution have not only earned them two wins but also helped them gain bonus points to tally 10 from two matches.

South Africa, on the other hand, were totally exposed by the Aussies in their first encounter after being dismissed for 171 with opener Rezze Hendricks making 43. Their bowling also cut a sorry figure as Australia A achieved the target in 31 overs losing just one wicket. The Proteas put up a better batting display against India A as Q de Kock (108) hit a century and Dane Vilas (50) scoring a fifty and skipper Dean Elgar will hope his team put up a better performance against Australia A tomorrow.

Kock’s century will augur well for the team but the failure of the other top order batsmen is a concern. Proteas captain Elgar said: “During the last three years our A team has not performed well and hope to do get the best of our players tomorrow. “South African cricket is going through lot of transformation and transition in all three formats. You see now that in our test side and one day cricket there are lot of new faces. This series is very important. We have been improving over the last three years. This trend is massive.”

Khawaja has lot of options and it remains to be seen if he would use three spinners besides new ball bowlers James pattinson and Nathan Coulter Nile. 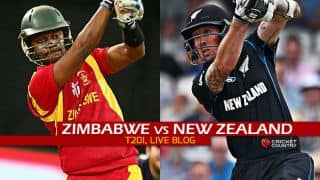