Mitchell Starc, Australia's leading wicket-taker in the series with 19, withdrew from the team on Sunday with a bruised heel.

Skipper Steve Smith has confirmed paceman Jackson Bird will replace Mitchell Starc in Australia’s team for the fourth Ashes Test against England starting in Melbourne on Tuesday. Smith also admitted he still had pain in his right hand after being struck in the nets on Sunday but would play in the Melbourne Cricket Ground showpiece. Australia have already reclaimed the Ashes after taking an unassailable three-nil lead in the five-Test series and are chasing a 5-0 whitewash over the beleaguered tourists.

Starc, Australia’s leading wicket-taker in the series with 19, withdrew from the team on Sunday with a bruised heel and will be replaced by Bird. Smith said Bird, the leading Sheffield Shield wicket-taker with 25 at 16.56 in four games for Tasmania this season, deserves his chance.

“He’s worked very hard. He hasn’t played since this game last year and he’s been on a few tours,” Smith told reporters on Monday. “He’s bowled exceptionally well in the first couple of Shield games that he played (this season).

“He bowls well out here (at the MCG). He deserves a crack and hopefully he goes really well.” Bird has been on seven overseas Test tours and has played in only two of them, most recently being overlooked during series in India and Bangladesh.

“It’s tough at the time but he’s taken every bit of advice and every bit of criticism,” Smith said of Bird. “He’s been fantastic around the group the whole time. Never complained, never whinged, just got on with the job and that shows great character.”

Smith, who boasts a Test average of 127.6 at the MCG after posting centuries in the past three Boxing Day games, said he still wasn’t feeling 100 percent after taking a blow on his right hand on Sunday.

“But I’ll be able to deal with it and I’ll get on with it. Maybe I’ll just have to use a bit more of my top hand throughout the game, a bit less wristy.”

“I copped a few (on the right hand) in the nets in Perth and a few more in the game. It just seems to be whenever you’re getting hit in a spot — it just continually gets hit.”

Smith, who was part of the Australia team that swept their home Ashes series against England 5-0 four years ago, said he was determined to keep up the pressure on tourists. But he also warned his team-mates of the dangers involved with getting too far ahead of themselves.

“We’ve now got an opportunity to keep winning. That’s been my message to the boys, don’t worry about 5-0 at this stage,” Smith said. “You’ve got to win this one first.”

Smith said the MCG drop-in wicket looked flat meaning hard work for the bowlers. “It looks pretty flat. It doesn’t look like there will be great deal of sideways movement, maybe a bit of reverse swing as the game goes on,” he said.

Meanwhile, batsman Peter Handscomb has been released from the Test squad to play for Melbourne Stars in their Big Bash League game against Perth Scorchers in Perth on Boxing Day.

Wicketkeeper Tim Paine has joined his team-mates at training after his arrival into Melbourne was delayed by family health problems. Darren Lehmann to step down as Australia coach after 2019 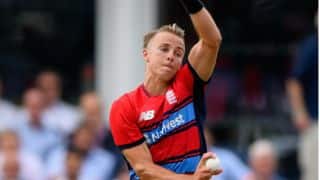