Steven Smith's side to take on India features two uncapped players and other newcomers.

Australia have named a 13-man squad for their upcoming five-match One-Day International (ODI) series against India. Steven Smith will remain captain and the squad consists plenty of new faces. With the mass retirement of experienced players in recent time like Michael Clarke, Brad Haddin and Mitchell Johnson among others, a host of internationally inexperienced faces make it to the side. Surprisingly, Shane Watson does not find his name on the team sheet. Even two uncapped players in Scott Boland and Joel Paris are part of the team being rewarded for their rich performances in the domestic Australian game. ALSO READ: India ODI squad for tour of Australia 2015-16

Apart from them, even Kane Richardson is a relatively fresh face in the international side having played only eight ODIs, the last of which came in November 2014. In this 13-man squad, apart from Smith, the other players who were part of Australia’s successful ICC Cricket World Cup 2015 squad include David Warner, Aaron Finch, George Bailey, Josh Hazlewood, James Faulkner, Mitchell Marsh and Glenn Maxwell.

The top order consists names like Warner, Finch and Smith who have proved themselves on the global stage. The middle order will be comprised of batsmen like George Bailey and Shaun Marsh, all-rounders Glenn Maxwell and James Faulkner and wicket-keeper Matt Wade. Hazlewood, Richardson, Paris and Boland. Australia have not named a single specialist spinner leaving the job entirely to Maxwell. It remains an interesting decision to axe Watson. 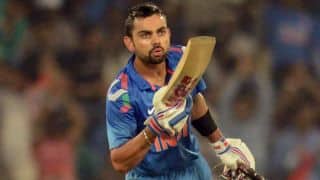