Australia beat a tenacious South Africa by four wickets to secure their place in the Under-19 Cricket World Cup final on Tuesday. 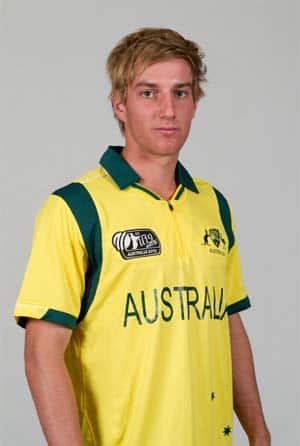 Australia beat a tenacious South Africa by four wickets to secure their place in the Under-19 Cricket World Cup final on Tuesday.

Australian captain Will Bosisto won an important toss and elected to bowl in overcast conditions at Tony Ireland Stadium here.

Steketee returned for his second spell and took the crucial wicket of South Africa Captain Chad Bowes (46), who had struck up a handy partnership of 88 with Murray Coetzee.

Coetzee went on to make his 50 before he was run out with a direct hit by Ashton Turner.

Gurinder Sandhu of Indian origin bowled a great line and length in the morning ending with the tidy figures of 10-3-23-2.

In reply, Australia lost the early wickets of James Peirson and Meyrick Buchanan.

Opening batsman Cameron Bancroft and Kurtis Patterson both soaked up the occasion and combined for a crucial partnership of 95 before Patterson was caught behind by de Kock.

Bosisto once again showed his class at the crease as he and Bancroft chipped away for a fourth wicket stand of 75 before Bancroft was run out for 66.

Bosisto looked likely to take Australia through before he was run out by Theunis de Bruyn for 40, his first dismissal for the tournament, when Australia were three runs short of the target of 192.

Turner kept his head under pressure and hit four to extra cover to seal the victory for the young Australians with nine balls to spare.

India and New Zealand meet in the second semifinal Thursday.(IANS)