Ryan Carters played a memorial match in Nepal just a week prior to the earthquake striking.

Australian cricketer Ryan Carters has opened up about his experience in quake-hit Nepal saying he was amazed at the culture he witnessed in the country. He was inspired by the fact that Nepali kids were as enthusiastic about cricket and attitude towards life as anyone despite the lack of facilities available to them. Carters undertook charitable work in the country following the earthquake that claimed 9000 lives just a week after he played a match, organised there by Cricket Association of Nepal (CAN), in remembrance of Phillip Hughes.

Carters’ charity called ‘Batting for change’ built three classrooms in Heartland School in Kathmandu with the USD 30,000 it garnered over the BBL 2013-14 season, where donations were made for every six hit by Sydney Thunder batsmen. The classrooms were used to shelter people left homeless following the disaster.

“It was terrible to see the news and being there the week before heightened the sense of shock,” said Carters to smh.com.au. “A week earlier I played in the Phillip Hughes memorial match that was organised by the Cricket Association of Nepal and I gained an extremely positive perspective of cricket in that country.”

Carters went on to speak of his experience with the people he worked closely with in Nepal. “All of the staff at the Heartland School, starting with the principal, Karan Goyala, are very passionate, dedicated and also humble,” said Carters. “They choose to dedicate their working lives to helping students from the poorer part of their community obtain a decent education.

“I was amazed by the culture of the place. You could see in the classrooms that the kids were very engaged, the teachers were making the most of every hour of class time. The playground was also full of kids who enjoy each other’s company. There’s 400 students at the school and I met each of them. I played some cricket and saw lots of smiles, heard lots of laughter and was inspired by the eagerness the children have to learn.”

Carters charity next aims to provide university education for about 500 impoverished women in Mumbai. “We’ll be supporting women’s education in India again this summer,” he said. “It was rewarding to see there can be a strong human connection between cricket players and cricket followers in Australia and young people in Nepal who lack the same opportunities we have but are as passionate about cricket and education and making a better life for their families. I was inspired by seeing them to do even more to help these people,” Carters concluded. 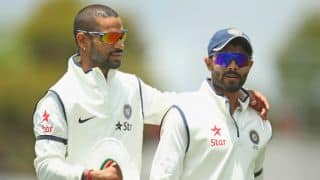 India A vs Bangladesh A 2015: Shikhar Dhawan will analyse fitness, Ravindra Jadeja will attempt to regain selectors trust