Australia registered a comfortable victory in the ICC Under-19 World Cup quarterfinal over West Indies by five wickets in Dubai on Sunday. Australia’s chase of 208 was set by half-centuries from openers Matthew Short (52) and Jaron Morgan (55).

Australia were dominant from ball one as they attacked the bowlers. Morgan dispatched anything in his zone. In tandem with Short, he took the attack to West Indies and was moving at a run-a-ball in the first 10 overs.

The West Indians were thrown off the rails as he attacked anything short or full. One shot through mid-wicket nearly took out the fielder’s head as it was hit with copious power. Morgan then also attacked the spinners, charging to them and hitting through the line. As a result, they put up a 107-run partnership in good time and put Australia on course.

Then Brian Charles got Morgan as he holed out to the deep. Then Morgan chipped one back as Ray Jordan took a magnificent catch to his right in his follow through. Damien Mortimer was then stumped off Charles and skipper Alex Gregory was bowled by a magnificent yorker by Jordan. Yet, that wasn’t enough as Australia had simply powered to a start. Ben McDermott was dismissed towards the end of the chase.

Ultimately, Jake Doran got in again and his unbeaten innings ensured they were through with five wickets to spare.

The West Indian total was set by a record ninth wicket partnership between Nicolas Pooran (143) and Jerome Jones (26). The duo shared 126 runs. West Indies had collapsed to 70 for eight.

But Pooran’s fight continued as he stitched a valuable partnership with Jones to bring some respectability to the score. He not only attacked the Aussies but also shielded Jones from taking the strike by picking a single on the last ball of almost every over. They brought up the fifty partnership with Jones scoring only two of them.

Pooran targeted left-arm spinner Thomas Andrews hitting him for a six in three consecutive overs. The Australians were frustrated and that also affected their fielding when they missed an easy run-out chance of Jones.

Pooran put the foot on the accelerator towards the end and got the ideal opportunity when Andrews came to bowl the penultimate over. Pooran smashed him for three sixes in the over. The Australians finally managed to dismiss Jones run-out got 26. West Indies will be more than happy to take this total after collapsing early on. Pooran was eventually dismissed by Walker for 143.

Man of the Match: Nicolas Pooran 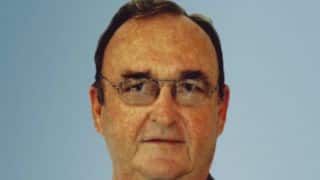