Australian batsmen made light work of the lowly English total as they chased down 131 inside 15 overs, in the 2nd Twenty20 International (T20I) to win the the match and also seal the T20 series. With this victory, Australia have now hammered the final nail to the English coffin in their trip Down Under this summer.

After a whitewash in the Ashes series, a woeful defeat in the One-Day Internationals (ODIs), England must have been begging their almighty for a victory in at least the T20 series, but just like the entire tour, misery chose them again.

Having lost the 1st T20 encounter, Stuart Broad won the toss at the MCG and decided to bat on a batting-friendly surface. Australia managed to turn a few heads when Brad Hodge came in to open the bowling. He went for 10 runs  in his first and only over, but the other Australian bowlers had different plans for the night.

All of them stuck to their plan and didn’t allow any of the English batsman to settle down and accrue some runs. Youngster Josh Hazlewood took four wickets out of the nine fallen, and was also adjudged Man of the Match. Mitchell Starc, making a comeback into international cricket after a long layoff, struck early in his spell as he dismissed Luke Wright for a duck.

Jos Buttler top-scored for England with 22 off 28 balls, before Broad and Tim Bresnan added a valuable 34-run stand to push the total beyond 120.

Coming in to bat with a target of 131 to chase, openers Cameron White and Aaron Finch went off to an absolute flyer, amassing 48 off just five overs before Finch departed. Australia, in order to keep up the momentum, sent in Glenn Maxwell at No 3, but he failed to last long, falling to James Tredwell.

Then came George Bailey, and he stitched a quickfire 77-run unbeaten stand with White to take Australia across the finishing with an age to spare; 5.1 overs to be exact. Bailey murdered the English attack, scoring 60 off just 28 balls in an innings which boasted of seven boundaries and three big sixes. He hit Jade Dernbach for 18 in the 12th over and Tredwell for 13 in the 15th over to finish off the chase.

Earlier in the Australian innings, White started off brilliantly as he set the tone of the chase, and laid the platform for Bailey to run havoc. Bailey finished off things with a boundary.

Of the five bowlers employed by England, Bresnan was the only one do a respectable job. He picked up the wicket of Finch and conceded just 11 off three overs. All the other bowlers were carted around the park.

Both the teams now go into the final match of the tour with the story of the summer so far — England will play for pride, and Australia for fun.

Man of the Match: Josh Hazlewood 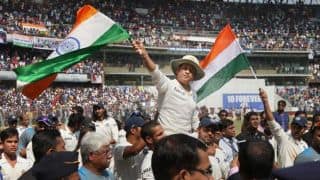 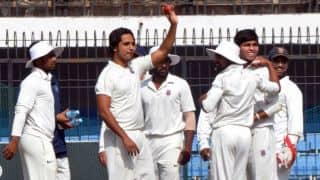