Ricky Ponting cracked an impressive 90 not out to steer Australia to an easy eight-wicket victory over Sri Lanka in the second one-day international on Sunday. 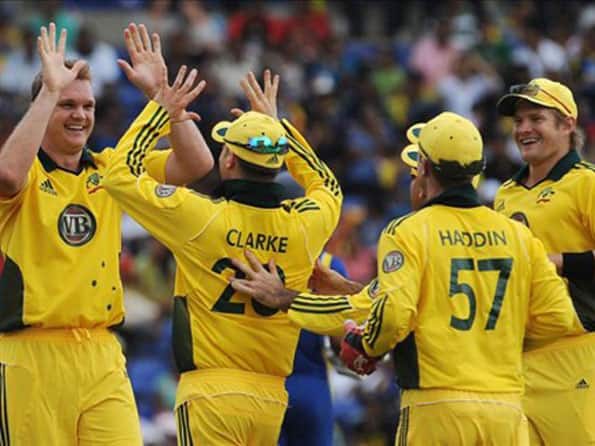 Ricky Ponting cracked an impressive 90 not out to steer Australia to an easy eight-wicket victory over Sri Lanka in the second one-day international on Sunday.

Ponting hit one six and eight fours in his 106-ball knock and skipper Michael Clarke made an unbeaten 58 as Australia surpassed Sri Lanka’s total of 208 with more than 11 overs to spare for a 2-0 lead in the five-match series.

The duo had also scored half-centuries in their team’s seven-wicket win in the previous match.

“It was a fantastic innings from Ricky,” said Clarke.

“The bowlers did a great job. They are executing their plans really well. Full credit to them.”

Ponting also added 94 for the second wicket with in-form opener Shane Watson (43) after the early dismissal of Brad Haddin.

“The game was set up by our bowlers who kept taking wickets,” said former captain Ponting, who was named man of the match.

“I am getting a few runs, so not being captain must be working all right.”

Watson, who became the first batsman to complete 1,000 runs in one-dayers this year, was bowled by paceman Lasith Malinga after hitting one six and four boundaries in his 51-ball knock.

“It was not a great day for us,” said Sri Lanka captain Tillakaratne Dilshan.

“We didn’t get enough runs. This was a 250 pitch. We have to work things out as a batting unit. Ponting and Clarke batted really well.”

Former captain Kumar Sangakkara top-scored for Sri Lanka with a patient 52, hitting just one six and one four in his 85-ball knock. He added 63 for the fifth wicket with Angelo Mathews (35).

Sangakkara fell just when he looked like stepping up the run-rate, caught by Johnson at long-on while attempting a big shot off spinner David Hussey in the 37th over.

Australia gained the upper hand when they reduced Sri Lanka to 77-4, with Lee, Johnson, Bollinger and left-arm spinner Xavier Doherty taking one wicket each.

Small steps lead to big leap for us, says Prior