Alastair Cook led England's resistance for most of the day, but his dismissal got Australia closer.

Alastair Cook has led England to complete a hard-working day with the bat, holding together the batting enough have them fighting another day. But his dismissal towards the end of the day, after a marathon effort, burst the small bubble of hope that England had left, or, more realistically, helped catalyse their potential downfall. A stalemate was likely with only 20 minutes to go before stumps as the duo of Cook and Buttler had batted for more than 25 overs and did not look like lowering their guard. But Steven Smith, the part-time leg-spinner, was brought in to cause a disturbance in the equilibrium, and he duly obliged: Cook prodded forward to a full delivery, and inside edged to the fielder at short leg. LIVE CRICKET SCORECARD: England vs Australia, 5th Test, The Oval, Day 3

But his knock of 85 was the difference between England’s two innings in the match. Asked to follow-on after a folding for a mediocre 149, Cook knuckled down to bat the day. He consumed 234 deliveries, most of which were blocked, left alone, prodded or nudged. He featured in promising-looking partnerships with Ian Bell, Joe Root, and Jos Buttler, but unlike Bell and Root, did not succumb to the intense examination by an accurate and varied attack.

If Peter Siddle bowled a nagging line and length to stifle the batsmen, Mitchell Marsh found good swing to beat the bat and tempt an edge. Off-spinner Nathan Lyon provided drift and turn to interest the close-in catchers, and Mitchell Johnson provided intense pace. The battle of attrition, with both camps refusing to budge, kept Cook, and thereby England, in the battle for a long time. Michael Clarke had little to lose to introduce Smith for a couple of overs, but Cook may have been so spent in resisting the quality attack that a difference in intensity and the arrival of a new face coaxed the elusive mistake, and probably brought the end nearer. LIVE CRICKET UPDATES: England vs Australia, 5th Test, The Oval, Day 3 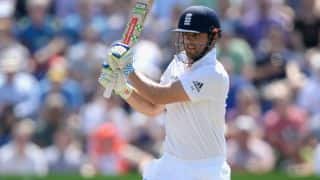