Fawad Ahmed, Adam Voges and wicketkeeper Peter Nevill were all called up by Australia.

Sydney: Legspinner Fawad Ahmed, batsman Adam Voges and wicketkeeper Peter Nevill were all called up by Australia Tuesday for upcoming tours of the West Indies and England. But there was no room in the 17-man squad for all-rounders James Faulkner and Glenn Maxwell, who were part of Australia’s one-day World Cup winning side.

Joe Burns was also overlooked, despite scoring two half-centuries in Australia’s last Test, against India in January. Paceman James Pattinson missed out with a hamstring injury, opening the door once again for Peter Siddle. Australia play two Tests in the West Indies from June 5, with their five-Test Ashes series starting in England on July 8.

Pakistan-born Ahmed, who sought asylum in Australia in 2010, got the nod ahead of Ashton Agar as the second spinner behind Nathan Lyon after a stellar Sheffield Shield season in which he took 48 wickets.

Voges won his place on the plane for similar reasons, with the 35-year-old Western Australian captain smashing 1,358 Shield runs to be the season’s highest scorer and player of the year with an average of 104.46. New South Wales keeper Nevill was picked as Brad Haddin’s understudy, preferred to Matthew Wade.

National selector Rod Marsh said the Test team had performed very well in recent times, and the big challenge was to maintain the form away from home. “We believe this squad has sufficient depth for these important Test matches against the West Indies and England and will give us the best chance of success,” he said.

Marsh said selectors could not ignore Ahmed and Voges after “sensational seasons” at domestic level. “They thoroughly deserve their call-up and the opportunity to be a part of this squad. We believe that both can play important roles in the side if required,” he said.

“Adam had one of the great seasons in Sheffield Shield history. He is an experienced player and quality character who will add talent and leadership to the touring party.

“Fawad has worked incredibly hard on his game and has demonstrated throughout the season that he can be a consistent wicket taker. “Peter Nevill has been on our radar for some time and deserves his opportunity  through weight of runs and performances behind the stumps,” he added.

Fast bowler Ryan Harris was included in the squad, but will only play the Ashes series, remaining in Australia throughout the West Indies tour for the birth of his first child. Ahmed and Voges were selected despite missing out on Cricket Australia contracts for the 2015/16 season.

Dropping off the list were Siddle, despite being named for the Test tours, and deceased batsman Phillip Hughes. Australia depart for the West Indies on May 19 and play their first Test on June 5. The opening Test of the Ashes series starts on July 8. 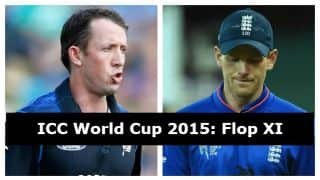