Australia include Mitchell Starc in the squad for Perth Test

Australia include Mitchell Starc in the squad for Perth Test

Left-arm seamer Mitchell Starc is the only change, coming in place of injured fast bowler James Pattinson, in the 12-man Australian squad for the third Test against India in Perth, starting on January 13. 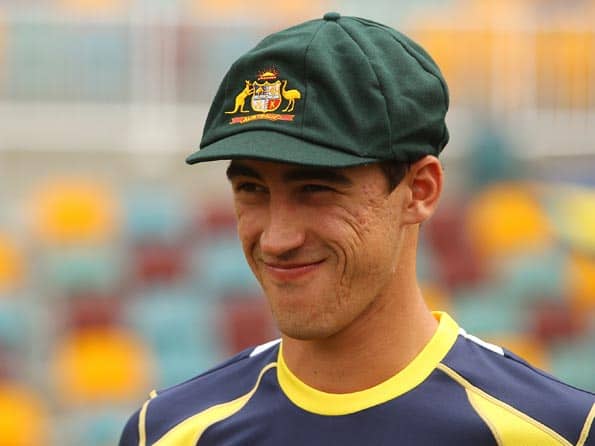 Left-arm seamer Mitchell Starc is the only change, coming in place of injured fast bowler James Pattinson, in the 12-man Australian squad for the third Test against India in Perth, starting on January 13.

Pattinson is carrying a injury in his left foot and has consequently been ruled out of the remainder of the four-match Test series.

Like Pattinson, Starc is too a 21-year-old fast bowler who is rated immensely even though he has just four wickets from two Tests he has played. The 1.96m tall New South Wales bowler is known to generate tremendous pace and bounce.

Off-spinner Nathan Lyon continues to be the squad despite his mediocre performance of the first two Tests.

It is likely though that he would be replaced with swing bowler Ryan Harris as there are indications that Australia would go with four fast bowlers at the bouncy WACA pitch.

The 32-year-old Harris is said to be his captain Michael Clarke’s favourite. He picked up 35 wickets from only eight Tests before he was laid low by injury.

Commenting on the squad, national selector John Inverarity said it was always the intention of selectors to rest Pattinson after the Sydney Test.

“The intention of the National Selection Panel was to rest James from the Perth Vodafone Test match as this young man has played in four Test matches over a period of just five weeks. This intention has become a necessity after post match scans have revealed James’ foot injury,” he said.

Updating on Pattinson’s injury, Australian team physiotherapist Alex Kountouris, said, “James Pattinson reported some left foot pain after the second innings of the Sydney Test match. Whilst he was able to bowl unrestricted in the game he did have pain towards the end of the match.

“As such, he had x-rays and scans after the game that have cleared him of a stress fracture but have demonstrated early stage bone stress injury of the metatarsal bone of the left foot,” he said.

“He will be managed carefully over the next few weeks and will not be available for selection for the remainder of the Test series against India.”(PTI)

It would be baptism by fire for Rohit Sharma at WACA: Mickey Arthur