Swing bowler Ryan Harris was on Friday included in Australia's 12-man squad for the second Test against India starting on January 3 in Sydney, while the eleven who played in the opening match here retained their places. 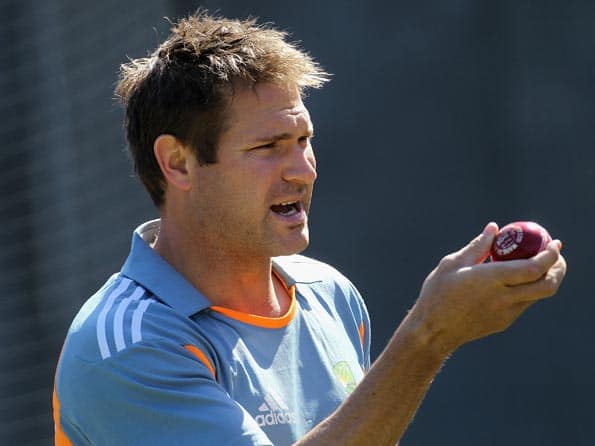 Swing bowler Ryan Harris was on Friday included in Australia’s 12-man squad for the second Test against India starting on January 3 in Sydney, while the eleven who played in the opening match here retained their places.

Pacer Mitchell Starc and all-rounder Daniel Christian were left out from the 13-man squad for the opening Test which Australia won by 122 runs at the MCG.

The 32-year-old Harris from New South Wales has picked up 35 wickets from eight Tests at 21.37 average before a hip injury during the Cape Town Test against South Africa last month put him on a rehabilitation programme.

“Harris has been included in the eleven that played the first Test in Melbourne. Ryan has had carefully monitored preparation, which has gone to plan,” said national selector John Inverarity.

Apparently skipper Michael Clarke is a great admirer of Harris’ quality seam and swing bowling. The quick bowler was extremely successful in Sri Lanka and South Africa before he suffered a hip injury in Cape Town.

The much-vaunted Indian batting line-up’s failure in the first Test — 282 and 169 in the two innings — could mean Australia opting for an all-pace attack at the SCG, a prospect captain Clarke had hinted after winning the first Test.

As expected, Ricky Ponting and Michael Hussey keep their places and so does wicketkeeper Brad Haddin despite his failure in the two innings of the first Test.

All-rounder Shane Watson continues to be sidelined as he has not fully recovered from his calf injury.

“Shane has not fully recovered from his right calf injury and is therefore not available for Sydney Test,” Australian team physio Alex Kountouris said.

“He will continue his rehabilitation and hopefully be available for one of the remaining Test matches.”

Off-spinner Nathan Lyon, who looked ineffective in the first Test with figures of 1 for 91, also retained his place in the squad but could be feeling the heat with the inclusion of Harris.