Former Australian captain Ian Chappell feels that the failure of Australia's once envied system to produce talented batsmen and potentially strong leaders is a flawed one now and the issue needs to be addressed soon. 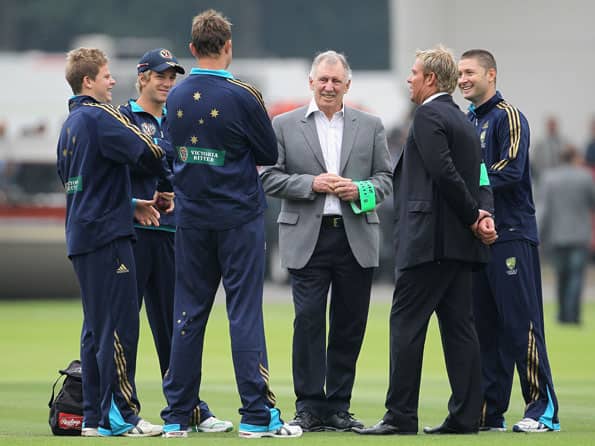 Former Australian captain Ian Chappell feels that the failure of Australia’s once envied system to produce talented batsmen and potentially strong leaders is a flawed one now and the issue needs to be addressed soon.

According to Chappell, since Ricky Ponting’s international debut in 1995 as a 20-year-old, there hasn’t been “another successful batsman blooded at a similar age”.

“In the following 16 years there’s only been Phillip Hughes, who was slightly younger but has yet to cement his position, and Michael Clarke, who has been mighty successful, but was nearly three years older. The rest have all been in the “mature” category,” Chappell wrote in his column in the Daily Telegraph.

Chappell also said that even though Peter Forrest gave a glimpse of becoming an international level player, he still has a long way to go.

“I’d put Forrest in that category. He looked an international player with his slick footwork and powerful hitting against the spinners. But one short-pitched delivery from Umesh Yadav troubled him, while another resulted in his dismissal. If he makes it to Test cricket, he will see plenty of short-pitched deliveries until he proves he can handle the bouncer,” wrote Chappell.

“And there’s also his move from NSW to Queensland, ostensibly to ensure a permanent spot in first-class cricket.

Chappell also criticised Brad Haddin’s non-selection, saying that a week earlier he was vice-captain of the Test team and then he was either dropped or rested.

“We have the outcry from fellow players over Haddin’s non-selection; their complaints about lack of communication sound similar to those levelled at the previous chairman during the Argus review. A few weeks ago he was vice-captain of the Test team. Now he’s either dropped (in his mind) or resting (as in the selectors’ minds).”

The former skipper believed that in the absence of a regular skipper, the vice-captain of the team should step in as the stand-in-skipper and not anybody else.

“With Clarke unavailable for one ODI, it seemed logical that either the vice-captain, David Warner, took his place or Haddin returned to the side. Neither occurred and Ponting was re-appointed for a day.

“A vice-captain won’t learn much about leadership by watching someone else perform the task. The fact young international players aren’t getting an opportunity to captain their state is a big concern. It is one reason for the apparent leadership vacuum,” said Chappell.

Stating that as recently as Mark Taylor’s captaincy reign, Australia had Ian Healy, Shane Warne, Steve Waugh and Ricky Ponting, who were all capable of leading the side if something happened to the skipper, Chappell said, “In the past couple of weeks, Australia have plucked George Bailey out of the first-class ranks to captain the Twenty20 side and now the vice-captain of the ODI side has been passed over.

“This gap in the Australian cricket education process needs to be rectified quickly.” (PTI)

Ajinkya Rahane not thinking about selection for Asia Cup

Ajit Agarkar has not given up hopes to play for India