Australia have dominated the day so far with accumulating runs in every session.  David Warner and Joe Burns made a 150 runs partnership before Joe Burns fell for 71 to Tim Southee. Usman Khawaja who came in the Test squad is looking solid with the bat on 113 . Brendon McCullum has looked a bit  OK than the morning session as his changes have work in picking up the sole wicket for the innings so far.David Warner(113) after coming back from a thumb injury he suffered in England is scored his 13th Test century in just 161 balls. Trent Boult has a couple of good overs to begin the session with being replaced by Mark Craig. Mark Craig has been spinning the ball extracting good bounce as well.  LIVE SCORECARD: Australia vs New Zealand 2015, 1st Test at Brisbane

Resuming the session on 103/1 Warner and Burns batting quick and looked to be in no trouble against the New Zealand bowlers.Trent Boult has been hit all around the park in his 14 overs so far. The only wicket in the innings to fall has gone to Tim Southee.Earlier, Australia skipper Steven Smith won the toss and elected to bat first as he brought in pacer Josh Hazlewood for Peter Siddle. New Zealand, on the other hand, too fielded a strong squad with five bowlers. The Australian openers in the form of David Warner and Joe Burns were off to a slow start in the opening five overs. Also, it was Burns, who survived a close shave from Tim Southee within the phase. LIVE UPDATES: Australia vs New Zealand 2015, 1st Test at Brisbane, Day 1 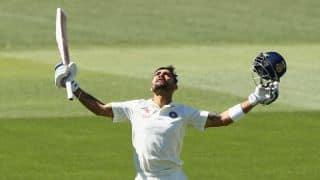 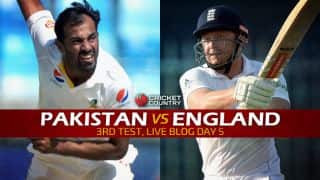