Australia restrict Pakistan to 96/9 in T20I at Dubai

Australia restrict Pakistan to 96/9 in T20I at Dubai

The new dawn for Shahid Afridi hasn’t gone according to plan. An Australian side with as many as four debutantes in T20 Internationals restricted Pakistan to a paltry 96. It was a perfect start for Aaron Finch‘s men though as they were clinical in the field and put pressure on Pakistan with some good fielding and tight bowling.

Afridi won the toss and chose to bowl. Australia drafted in Kane Richardson, Sean Abbott, Phil Hughes and Cameron Boyce. Richardson, Abbott and Boyce marked the occasion by taking wickets in their first overs in T20 Internationals. But, it was Glenn Maxwell who started things off with his seemingly innocuous off-spin.

In the third over, Awais Zia played one to mid-off and then Umar Amin was stumped off his third ball. It only got worse from there on as Sohaib Maqsood was bowled by Maxwell a couple of overs later. Pakistan had lost three inside the first five overs.

After the powerplays, Cameron Boyce was brought in and Ahmed Shehzad, the only man in the top order hit a boundary in this innings, was caught at first slip. An over later, Umar Akmal played a rash shot and was caught at mid-off. Shahid Afridi followed two overs later when he was dismissed leg-before by Abbott. Saad Nasim fought on till the 16th over till Mitchell Starc bowled him. Nasim’s 25 had helped extend the fight. Wahab Riaz also contributed with 16 and was only the second batsman to hit a boundary in the innings. Raza Hasan batted through to ensure they don’t get bowled out. 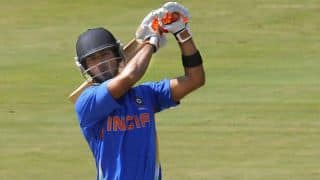