Australia‘s bowlers restricted South Africa to only 128 for seven in the third Twenty20 International at Centurion on March 14, 2014. The South African innings never got off to any sort of momentum on a slow track. Quinton de Kock top-scored with 41 off 40 deliveries, but the next highest was Albie Morkel, who scored 18 off 11 deliveries. Mitchell Starc, Glenn Maxwell and Brad Hogg took two wickets each.

Australia captain George Bailey won the toss and elected to bowl first. The first over was a maiden from Starc to de Kock. Nathan Coulter-Nile though got struck for a four and a six over mid-wicket by de Kock in the second over of the match. In the third over, Starc struck by dismissing Hashim Amla LBW for two runs.

South Africa captain Faf du Plessis came out into the middle and hit a delivery from Maxwell for a four through mid-wicket. But two deliveries later he chipped one straight to Brad Hogg at mid-off. Du Plessis was dismissed for five. JP Duminy was the next batsman in and he struck two fours early on. De Kock then swept veteran left-arm chinaman bowler Brad Hogg for a four.

Just as a partnership seemed to be building, Duminy came down the track and tried to hoick a delivery from Maxwell on the pads over extra-cover. But he did not get enough connection and Moises Henriques took the catch at sweeper-cover. Duminy scored 13 runs off 16 deliveries.

AB de Villiers came in at No 5 and got his first boundary with a big six to a short delivery from Hogg over deep mid-wicket. De Kock joined in on the party with a six of Hogg’s bowling over extra-cover. But again, South Africa lost a wicket as de Villiers hit one from Hogg straight to Brad Hodge at deep square-leg for 11.

David Miller was the next to follow as he drove on the up to a length delivery from Moises Henriques straight to Bailey. He was out for two. De Kock’s relatively long innings ended as edged one to Brad Haddin behind the wickets to give Hogg his second wicket.

Albie Morkel gave the crowd some excitement with a couple of sixes over the deep mid-wicket region. The first was off Shane Watson and the second was off Starc. But Starc struck with a brilliant yorker to bowl Morkel, who went for a shot too many.

Wayne Parnell and Beuran Hendricks then added an unbeaten 25 runs for the eighth wicket. Hendricks even hit a six in the last over bowled by Coulter-Nile over mid-wicket. One would think that South Africa were a few runs short, even on a slowish pitch. 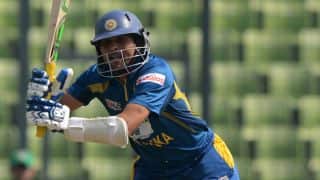 ICC World 2014: Tillakaratne Dilshan’s injury could keep him out of tournament