Australia restrict South Africa to 222 in the final ODI

Australia restrict South Africa to 222 in the final ODI

Hashim Amla and Jacques Kallis hit half-centuries but South Africa were unable to dominate Australia's bowlers in the third and final one-day international at Kingsmead on Friday. 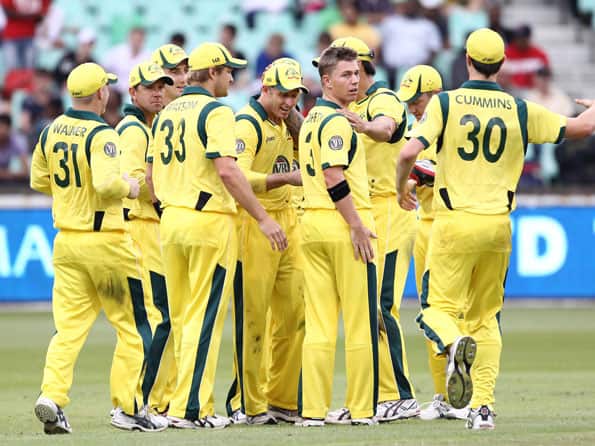 Hashim Amla and Jacques Kallis hit half-centuries but South Africa were unable to dominate Australia’s bowlers in the third and final one-day international at Kingsmead on Friday.

South Africa scored 222 for six in their 50 overs after winning the toss and batting on a heavily overcast day.

Amla made 52 and Kallis 54 but both needed more than 70 balls to make their runs and were out soon after achieving their half-centuries.

With the series tied at one-all, Australia produced a disciplined bowling and fielding performance, conceding only 15 fours and two sixes. Amla hit seven of the fours, while Kallis hit both sixes and three fours.

It was an impressive comeback by the tourists after South Africa scored 22 runs in the first two overs, including four boundaries by Amla off Pat Cummins.

Bollinger did not take a wicket but conceded only 43 runs in 10 overs despite bowling four wides, one of which went for an extra four runs, while Johnson took two for 37 on a pitch which had bounce but lacked pace.

With boundaries at a premium, five batsmen were caught in the outfield trying to break the shackles, while Amla was run out by sharp fielding from Cummins at short third man as he and Kallis attempted a risky single.

South Africa retained the team which played in the first two matches and which won the second match in Port Elizabeth by 80 runs on Sunday to level the series.

Shaun Marsh came into the Australian team for the first time in the series after suffering a shoulder injury in a Twenty20 international at the start of the tour. He replaced Steve Smith. (AFP)