England thrashed Australia by 242 runs in the third ODI of the ongoing series, at Trent Bridge. England now have an unassailable 3-0 lead in the 5-ODI series. Jonny Bairstow and Alex Hales both scored hundreds, Jason Roy got 81, and Eoin Morgan scored the fastest fifty by an England batsman. England put up 481 for 6, bettering their own world record of 444 for 3, which they had set against Pakistan at the same ground two years ago. They hit 21 sixes in all, one short of the existing world record.

Australia were then bowled out for 239, conceding a 242-run defeat. We have discussed the statistical highlights of England’s score earlier. Here is a list of ‘milestones’ Australia set during this embarrassing defeat:

England’s victory is their largest while batting first. Their previous best was 210 runs, achieved three years ago, when they scored 408 for 9 and bowled out New Zealand for 198 at Edgbaston.

This is also Australia’s worst defeat while chasing. Their previous biggest margin of defeat was 206 runs, against New Zealand at Adelaide way back in 1985-86.

The previous largest margin of victory in an England-Australia match dates back to 1998-99: Australia scored 272 for 5 at Melbourne and bowled out England for 110, thus winning by 162 runs. 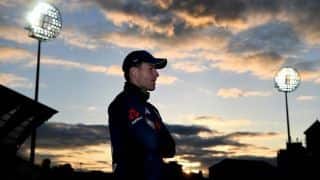