Australia went to lunch on 123 for five as they struggled through a shortened first session on the fifth and final day of the second cricket Test against West Indies at Queen's Park Oval at Port of Spain on Thursday. 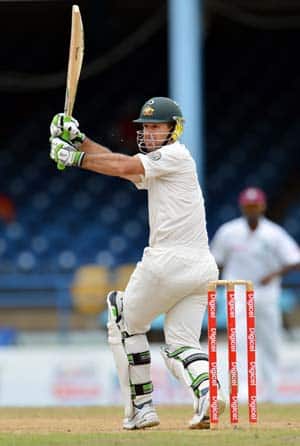 Australia went to lunch on 123 for five as they struggled through a shortened first session on the fifth and final day of the second cricket Test against West Indies at Queen’s Park Oval at Port of Spain on Thursday.

Only 50 runs were scored in the 25 overs bowled as Australia extended their lead to 177 runs while losing two wickets.

A 45-minute delay, caused by a wet outfield, virtually ruled out any chance of a result other than a draw especially with just 30.4 overs bowled on Wednesday

Matthew Wade was 15 not out with Michael Hussey on 11 after Ricky Ponting (41) and skipper Michael Clarke (15) had been the batsmen dismissed.

The unlucky Fidel Edwards finally took his first wicket of the match in his 10th over of the second innings.

A short ball to Ponting had him playing one of his favourite hook shots but he failed to keep the ball down.

It went straight to Kieran Powell on the square leg boundary and Ponting was gone for 41 off 85 balls, an innings which featured three fours.

The highlight of the morning came in skipper Darren Sammy’s second over.

He had dropped a sitter at first slip earlier in the innings but now took an excellent catch off his own bowling to remove his opposite number Clarke.

The delivery seemed to stop a bit off the pitch and Clarke was through the stroke a little early before Sammy thrust out his right hand to take the chance.

That reduced Australia to 95 for five and the lead only 149.

When Wade joined Hussey it looked as though the pair were trying to push the scoring along but tight fields and a very slow outfield still meant that runs were at a premium.

Having won the opening Test in Barbados, Australia would be more satisfied with a draw as they would retain the Frank Worrell Trophy and go into the final Test still one up in the series.

Before play started, it was announced that Australian fast bowlers Peter Siddle and James Pattinson, who is playing in the current match, would be returning home with back injuries.

Siddle has had back soreness since the first Test in Barbados and scans have shown that he has early signs of a lower back bone stress injury.

Pattinson has had acute lower back pain since day three of this Test but will bat at number eleven in Australia’s current innings if needed.

The final Test starts in Dominica on Monday but Australia have two other pace men in their squad — Ryan Harris, who played in the first Test and left-armer Mitchell Starc who last played in the Perth Test against India in January. (AFP)