The five-match T20I will run concurrent to their South Africa tour for which Australia have named a 19-man squad separately. Australia have included uncapped trio of teenage spinner Tanveer Sangha, wicketkeeper-batsman Josh Phillipe and fast bowler Riley Meredith in their 18-man squad for the New Zealand T20I series next month. The five-matches will run concurrent to their South Africa tour for which Australia have named a 19-man squad separately.

Matthew Wade, who has been dropped from the Test squad following a poor India series, has kept his place in T20Is while the fast bowling duo of Jhye Richardson and Jason Behrendorff have also found places following lengthy layoffs due to surgeries.

Ashton Agar has also been included after hurting his calf during the third ODI of the three-match series at home against India last December while allrounder Daniel Sams, who has been out of action for the past few matches in the ongoing Big Bash League after hurting his hand, is also part of the squad.

Sangha, 19, has returned impressive numbers in BBL this season with 21 wickets at an average of 16.66 and an economy rate of 8.04.

“Adam Zampa has developed into one of the best spinners in international white ball cricket and we have been most impressed by Tanveer Sangha, who has been brilliant throughout the pathways and with the Sydney Thunder this season,” Australia chief of selectors Trevor Hohns said in a statement on Wednesday.

Ben Oliver, Cricket Australia’s Executive General Manager National Teams, said sending teams for concurrent teams is not ideal but they are committed to “assist our friend” during this challenging period.

“Cricket Australia is committed to playing our role in international cricket while acknowledging the challenges of the pandemic and ensuring the health and safety of our players, staff and community,” Oliver said.

“The Australian men’s T20I tour of New Zealand and Australian men’s Test tour of South Africa are important to both host boards and we have been working constructively with their respective management teams on the planning for both tours.

“We do not envisage replicating concurrent Australian men’s tours in the future, but we appreciate the need to do so now to assist our friends around the world during this challenging period for international sport and given the additional time requirements of mandatory quarantine periods,” he added. 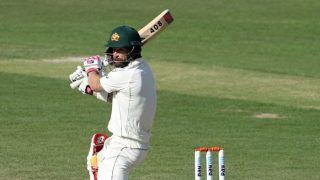