Australia beat England by 111 runs and are off the mark in their opening fixture in the ICC Cricket World Cup 2015, and in the process gain two points after the victory in the Points Table. Aaron Finch scored a 128-ball 135, which was followed by half-centuries from skipper George Bailey and Glenn Maxwell plus contributions by Mitchell Marsh (21) and Brad Haddin (31) lower down the order ensured that England were set a mammoth target of 343. India vs Pakistan Live Score

Live Updates: Australia vs England Pool A match at Melbourne

England had a terrible time while they were bowling and in spite of a fifer by Steven Finn, which included a hat-trick in the last over, England could not restrict Australia to a gettable total. England were low on confidence going into this game as they lost their final warm-up match against Pakistan from a winning position. Australia have managed to pile on more misery on their rivals after demolishing them in the recently concluded tri-series, which also included India. Scorecard of  Australia vs England Pool A match at Melbourne

Australia have been on top ever since they took the field as Mitchell Marsh got his maiden fifer in his World Cup debut. He was well supported by Mitchell Johnson and Mitchell Starc. Johnson showed the kind of aggression that he is famous for and it proved to be fatal for England. The most disappointing part was England skipper getting out for a duck just when his team needed it the most. ICC Cricket World Cup 2015: POINTS TABLE

He hasn’t scored many runs since he scored 121 against Australia in the opening match of the tri-series. England lost wickets at regular intervals and didn’t have any partnerships in their innings other than the 50-plus stand he had with Chris Woakes lower down the order, but it was too late by then. James Taylor top scored for England with with an unbeaten 98 but it wasn’t good enough to save his tram from a huge loss, which is also his highest score in One-Day International (ODIs).

England had earlier won the toss and elected to bowl first. Although they will be disappointed with a huge loss in the very first game, they will be confident of making into the quarter-final.

Man of the Match: Aaron Finch 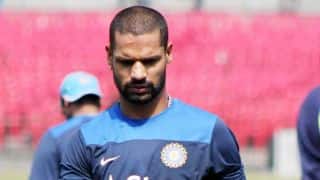 Valentine’s Day and India vs Pakistan in Cricket World Cup: 7 romances that knew no border