All-rounder Glenn Maxwell on Monday said there would be no let-up in Australia's strategy of targeting the Indian batsmen with the short-pitch deliveries when the two teams square off against each other in the fourth One-Day International (ODI) in Ranchi on Wednesday. 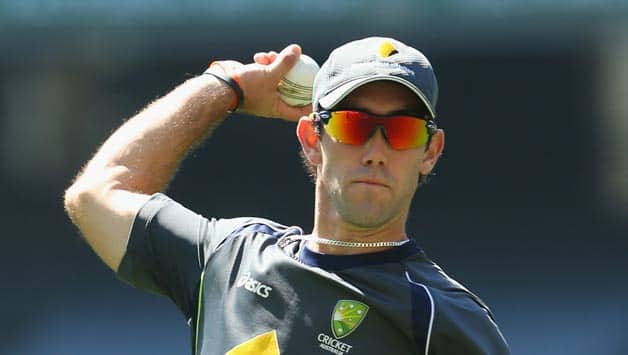 All-rounder Glenn Maxwell on Monday said there would be no let-up in Australia‘s strategy of targeting the Indian batsmen with the short-pitch deliveries when the two teams square off against each other in the fourth One-Day International (ODI) in Ranchi on Wednesday.

“I think the short ball has probably been our best strategy so far. I don’t think we’re going to change our strategy too much. We thought we bowled pretty well (in the last match),” Maxwell told reporters in Ranchi.

“Unfortunately, MS Dhoni went off at the end and played brilliantly. I thought we bowled really well last game. It felt like we sorted out a few of their batsmen. Hopefully they’ve got a few worries in their camp. We’re feeling pretty good at the moment,” he said.

Australia’s bowling spearhead, Mitchell Johnson, used the short ball successfully against the Indian middle-order and sent the hosts on the back foot in the third ODI at Mohali with figures of 10-1-46-4. The visitors, who lead the series 2-1, won the Mohali rubber by four wickets riding on James Faulkner‘s match-winning innings.

The Australians will now take on India skipper Dhoni in his home town at the JSCA International Stadium Complex. Dhoni played a captain’s knock of 139 not out under trying conditions to set up the third ODI in Mohali.

Talking about their plans against him, Maxwell said, “I think we had pretty good plans to him in the last game, though a couple of things didn’t quite go to plan. I think we dropped a catch, one ball that just cleared mid-off.”

“If we take those chances, I think we’re chasing 260-270 and we finish that game a lot earlier. I felt like our plans were very good. We shut him down early. We made him face a lot of dot balls at the start of the innings. Hopefully we get a little bit more assistance with the ball here and some spin as well, we can really put a lot of pressure on him.

“It’s going to be very loud. The crowd is going to love it when MS comes out and tries to do his thing again. Hopefully, we can shut that down and keep the crowd as quiet as possible,” he said.

Maxwell has been contributing with valuable knocks in the middle-order to help Australia to big totals, although, he made only three in the last game.

Speaking about his approach to batting, Maxwell said, “I think playing in South Africa for the A series helped my game a lot. The wickets were pretty favourable for batting so it was good to spend a bit of time in the middle. Over the last couple of years I haven’t really spent a whole lot of time in the middle.

“It was nice to work on my batting over there for an extended period of time. It ended up working pretty well for me because that led me straight back to England and then the Champions League Twenty20 (CLT20). I felt like I’ve been in good form for the past six or seven months. Hopefully that continues,” he added.

The Aussie batters have been consistent with runs but they are yet to notch a hundred in the series.

When asked about the absence of an individual century, he said, “No one made a century even in the game we had scored 359 but we had our top-five make fifties and that’s the first time in cricket history. I think it just shows how well the team is playing as a whole. Even though no one has got a hundred yet everyone has played pretty well.

“The guys obviously want to post three figures, but even if they’re not and we’re getting the job done I think we’re very happy with the way we’re going.”

The series had seen high-scoring totals with the Aussies not intimidated by the hostile crowd atmosphere and Maxwell said they were lucky to play the Indian Premier League (IPL) and CLT20, which was a good preparation for the series.

“Definitely. We’re very lucky that we’ve got the opportunity to play in the IPL and the CLT20 where you get used to these crowds. When you come over here you’re not overawed by it. It’s just another day at the office. It’s very enjoyable playing in front of the big crowds in India.”