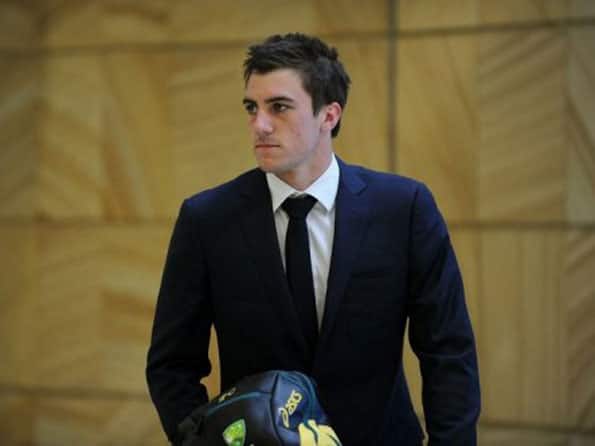 Teenage paceman Cummins has yet to play a senior international match against England but all that is set to change when the series gets underway at Lord’s here on Friday.

While many overseas players have been inspired by their first match ‘at the home of cricket,’ — Australia seamer Bob Massie took a stunning 16 wickets while making his Test debut at Lord’s in 1972 — others have been over-awed and struggled with the slope that runs across the ground.

But Clarke, speaking at Lord’s on Thursday, said he expected the 19-year-old Cummins to rise to the occasion, having seen him take seven wickets on his Test debut, including six for 79 in the second innings, in a two-wicket win over South Africa in Johannesburg in November.

“He’s done so in the past,” said Clarke. “His debut against South Africa was exceptional. He’s a very nice kid and he loves his cricket so he’ll be out there just to try and enjoy himself and do as well as he possibly can.

“Like a lot of the guys who haven t experienced UK conditions it’s going to be a little different for him. It’s going to take some time (for him) to adjust and see what conditions are like, but so far, so good.”

Australia go into the series ranked as the world’s number one side in one-day internationals. But a 5-0 sweep for England, already top of the Test rankings, will put them on top of the standings for the 50-over format as well.

“They’ve been very consistent, that’s the one thing about the No.1 team in the world it doesn’t happen overnight, it’s about consistency and playing your best cricket for a period of time,” said Clarke.

“As we know, they’ve won their last six series at home so they’ve been playing some really consistent cricket so it’s important for us to play well and stay at No.1.

“Our goal as an Australian cricket team is to be No.1 in the world in all three forms and I hope we can play some good cricket in England here and stay there,” he added.

“I guess we’ll see, over the next couple of weeks, how we go when we’re under pressure against a very good and confident one-day team.”

Meanwhile Cook, out for five when Australia thrashed Essex by 179 runs on Tuesday, was well aware of the step-up in class England now faced following their 2-0 win over the West Indies.

“They (Australia) are ranked number one in the world, they are a quality outfit,” said Cook.

As for the prospect of a 5-0 clean sweep, he added: “Let’s not count our chickens just yet, before they hatch. That’s totally irrelevant for us.”

Some have tried to bill this series as a dress rehearsal for next year’s Ashes in England, with Australia desperate to get their hands back on the urn.

However, opening batsman Cook, a star of England’s 3-1 Ashes series win in Australia in 2010/11, insisted: “We’re taking this just as a five-match series now. It’s very important and we want to win it.

“If we’re talking just before the first Ashes Test in a year’s time, you won’t be talking about what happened in this one-day series.”(AFP)

Preview: Sri Lanka wary of Pakistan resurgence in the second Test at Colombo