When captain Dinesh Chandimal was asked about the murky situation, he said: "I don't have any comments on that."

Sri Lankan cricket has been embroiled in a litter of corruption activities of late with the ICC having to step in to take stock of the situation. There is currently an amnesty which will run from January 16 to 31 in place for anyone to come forward with further information after former players, including Sanath Jayasuriya and Nuwan Zoysa, were charged under the anti-corruption code.

“Anything around will certainly worry players, they are all human, even we are feeling a little nervy about what we are hearing, with the allegations we still don’t know exactly where things are,” Arnold, who is part of the Fox Sports commentary team for the upcoming two-Test series against Australia, was quoted as saying by ESPNCricinfo on Wednesday. (ALSO READ: Sri Lanka hoping for a miracle in Australia Test series)

When captain Dinesh Chandimal was asked about the murky situation, he said: “I don’t have any comments on that.”

Investigations by the ICC began in 2017 after allegations made by former seamer Pramodya Wickramasinghe which led to current players, including Chandimal and Upul Tharanga asking the Sri Lankan board to address the “baseless allegations”.

The most worrisome charge was against Jayasuriya for his actions during his stint as chairman of selectors pertaining to a one-day series against Zimbabwe in 2017. (ALSO READ: Sri Lanka cricket corruption: ICC announces 15-day amnesty)

According to the report, Sri Lanka sports minister Harin Fernando met with the ICC Anti-Corruption Unit s General Manager Alex Marshall and the duo believed that the issue was widespread.

“Sri Lanka is being ranked one of the top countries for cricket corruption,” Fernando told AFP. “They told me that the problem was not limited to bookies, but even the local game’s links with the underworld.” (ALSO READ: Former champions Sri Lanka, Bangladesh miss direct entry for 2020 T20 World Cup)

Fernando even alleged in a recent interview that were occasions to even bribe him to influence team selection. An investigation is also said to be underway about his allegation as well. 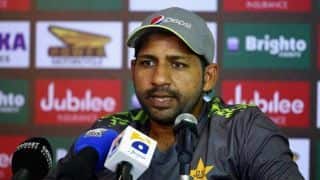