Melbourne [Australia] (ANI): In the wake of the lollygate incident which has spiced up a rather dull Australian summer, South African pace spearhead Dale Steyn has bowled a sour bouncer at the opposition, saying the Steve Smith led-side, which has already lost the three-match Test series, is now blaming the lollipop for the same. Earlier, stand-in skipper Faf du Plessis was charged with ball tampering by the International Cricket Council (ICC) after he allegedly applied a mint-infused saliva to the ball during the fourth day’s play of the second Test against Australia, which concluded in Hobart on Tuesday. Live Cricket Scorecard: Australia vs South Africa 3rd Test at Adelaide Oval, Adelaide

Beaten with the bat. Beaten with the ball. Beaten in the field. Mentally stronger. Here’s a idea, Let’s blame it on a lollipop (sic), Steyn tweeted. Heaping fuel on the fire he then added the #soft , news.com.au reported.

Just so we clear, I’m not blaming the aussies, but I won’t let a fantastic series win be tarnished by some lollipop fabrication. 3-0 mission, the Proteas pacer added.

The 32-year-old was found to have breached Article 2.2.9 of the ICC Code of Conduct, which relates to “changing the condition of the ball”.

“The alleged incident happened on Tuesday morning when TV footage appeared to show du Plessis applying saliva and residue from a mint or sweet, an artificial substance, to the ball in an attempt to change its condition,” the ICC said in a statement.

Du Plessis has pleaded not guilty and is now seeking legal advice to further contest the charge. The matter will now be heard by Andy Pycroft of the Emirates Elite Panel of ICC Match Referees, but a date for the hearing is yet to be decided.

Earlier, the ICC had confirmed that they were reviewing the video footage showing du Plessis chewing a white lolly in his mouth, licking his finger on the mint before repeatedly shining and rubbing the ball. Bill Storer and other bowling wicketkeepers 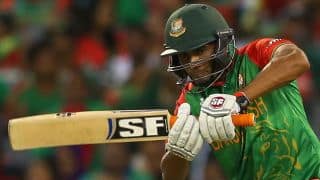