Australia’s record in Champions Trophy against New Zealand has been quite impressive. Out of the 5 matches played between them, Australia have come out as winners in 4, while one match ended in a no-result. The last time these two sides match, New Zealand came triumphant winning the Chappell-Hadlee Trophy 2-0 in their own backyard.

For live streaming and telecast of the match in other nations, the details have been given below:

Australia’s last ODI series win came against Pakistan at home when they thrashed the visitor’s 4-1. New Zealand’s last ODI assignment was in the Ireland Tri-Nation series where almost a second-string side came on top. With all their key players back in the foray for the Champions Trophy, the Black Caps will be a force to reckon with.

With England already winning their opening match with a massive margin, the pressure will be on both Australia and New Zealand to come out all guns blazing. 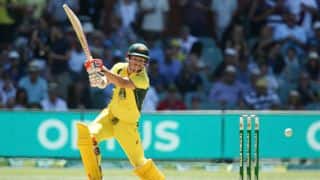