The last time Australia and New Zealand played an ODI at a neutral venue, was at this very ground, Edgbaston, in Champions Trophy 2013. The match was washed out.

In December last year, New Zealand toured their neighbours Australia for the three-match Chappell-Hadlee Trophy. They were blanked 0-3. Hardly over a month later, it was Australia s turn to tour them; interestingly, for the same trophy. This time, the trophy changed hands as New Zealand won it 2-0 with one game being washed out. If we go two years back, these two teams played each other twice in the World Cup 2015 in the group stage and final. New Zealand won the group stage clash at home, while Australia won the home final. FULL CRICKET SCORECARD, ICC Champions Trophy 2017, Australia vs New Zealand – Match 2

There is a pattern here.

Australia and New Zealand, two familiar rivals, have had the upper hand on each other while playing at home and have faltered in away games. Going by the trend, it would not have been difficult to predict who the winner would be from their first game in ICC Champions Trophy 2017 on Friday, if only it was played either in Australia or New Zealand. However, they will be playing at a neutral venue Edgbaston in England. Interestingly, the last time these two teams played an ODI at a neutral venue, was at this very ground, Edgbaston, in Champions Trophy 2013. The match was washed out.

So what to expect from this Group A fixture?

The world champions are coming into this game on the back of a pay dispute with the Cricket Australia (CA). It is unlikely to affect the side s morale though, as the Australian side is a bunch of extremely professional and fiercely competitive individuals who take pride in representing Australia.

A full-fledged Australian team last played an ODI in January this year, when they beat Pakistan 4-1 in five-match ODI series. After that, a lot of water has flown under the bridge, with second-string Australian sides losing the Chappell-Hadlee Trophy to New Zealand, a home T20I series to Sri Lanka and Test series to India.

Most of their main players are coming straight from the 10th season of Indian Premier League (IPL), where they fared well. The likes of David Warner, Steven Smith, Aaron Finch, Chris Lynn, Glenn Maxwell and Pat Cummins had a good time in IPL 10. Majority of their players are in good form and Australia have a problem of plenty, which is actually a happy headache to have.

Australia have as many as four choices for the two opening slots, with Chris Lynn and Travis Head also presenting their case apart from Warner and Finch. Then they have Marcus Stoinis, John Hastings and Moises Henriques tussling for the all-rounder s berth in the XI. Adam Zampa, the lone spinner, may miss out with Head and Maxwell providing spin options.

In the pace attack, they have four equally good bowlers but only three can make it to the XI. “I don’t think we’ll end up going with the four big quicks,” Smith told reporters at Edgbaston on Thursday. “We’ve got a couple of options there as all-rounders, he added, hinting at going in with either of Stoinis or Henriques.

On the whole, Australia look a better side on paper as well as a well-oiled machinery with all their parts functioning properly. Moreover, they also have the historical advantage having beaten New Zealand in all the previous Champions Trophy encounters by their side. Australia, thus, start favourites in this Group A fixture.

A second-string New Zealand side, playing without at least 7-8 of their senior players, who were away for the IPL, ended up as the top side in recently concluded Ireland tri-nation series. However, the Champions Trophy is going to be a completely different ballgame altogether. Competing against 7 best teams in a tight tournament of this quality, New Zealand will need to bring their A game to the table. Every single time.

New Zealand have an exciting group of players at their disposal. What can hurt them, however, is not having a settled line-up. They have tried wicketkeeper-batsman Luke Ronchi as opener in one of the warm-up games against India, where he came good top-scoring with a fifty. If they make him open in this game, Tom Latham may miss out, making room for an all-rounder lower down the order. Mitchell Santner s all-round skills may see him pip Jeetan Patel for the only spinner s spot. But then Patel’s county cricket experience can come in handy where he has reputation as an all-rounder.

There are other spots too, which are debatable. New Zealand will have to find the right balance right from the beginning, for the schedule of Champions Trophy does not allow any scope to err. One error, and the team may well be on its way back home.

Pitch and conditions: Two of the three warm-up games being played at Edgbaston saw scores well above 300 being chased down. Pakistan chased down Bangladesh’s 341 and New Zealand gunned down Sri Lanka s 356 nonchalantly. This suggests conditions conducive for batting will be on offer for this Group A clash. One game, between Pakistan and Australia, though, was washed out. On Friday too there is a forecast of shower or thunderstorm. 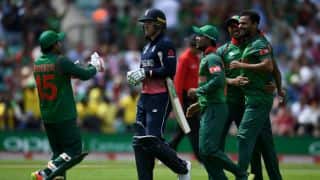 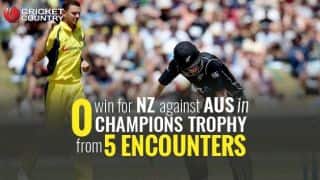