A gritty century by Faf du Plessis was the only bright spot but South Africa head into the second day with their nose ahead at the Adelaide Oval.

A different Australian cricket team took field in the first day of their third and final Test against South Africa, which showed all positive signs of improvement that a desperate nation wanted to see after two weeks replete with horror. Australia lost the toss and despite the minor setback, the hosts showed a lot of aggressive intent to restrict South Africa to a modest total in the first innings. For South Africa, a gritty century by Faf du Plessis was the only bright spot, but they head into the second day with their nose ahead in the day-night contest at the Adelaide Oval. LIVE CRICKET SCORECARD: Australia vs South Africa, third Test, Day One at Adelaide

Du Plessis, the man who hogged all the limelight from Trevor Hohns (the one who made as many as six whopping changes to the Australian side), walked out amid boos and jeers from the local crowd. But when du Plessis took two runs off Nathan Lyon under lights to make Adelaide Oval one of his favourite ground with yet another century, the crowd stood up to cheer for the South African captain, who was the only one from his side to show some intent against the pink cricket ball, which many others failed to even clearly see.

The day began with South Africa winning the toss, but Australia seized the advantage. Mitchell Starc provided early wicket. He had Dean Elgar caught at slips for 5. The tourists had a poor start, as their No. 2, 3 and 4 were dismissed for identical scores of 5. As a matter of fact, it was the first such instance in Test cricket.

Jimmy Cook was the first South African to face the white ball in international cricket. And on Thursday, his son Stephen became the first to face the pink ball. South Africans were apprehensive with the idea of playing with the pink ball a few months ago, but after ending the first day s play at a strong position, they will be looking forward to the second day with a huge lead in their kitty.

The right-handed Cook was the second highest run-getter for South Africa. Cook faced 99 balls, and hit 4 boundaries to score 40 runs before he was removed by Starc.

However, the star of the day was the South African captain, who has dominated headlines across Australia for the past one week. When du Plessis walked out to bat with his side making a shaky start, there was a lot of calmness around the right-hander, who pulled things back in control. Du Plessis fought throughout the day against the disciplined Australian bowlers, who kept chipping away with wickets, but not for once did the right-hander flinch. Du Plessis was brave to declare the South African innings at 259 for 9 when debutant Tabraiz Shamsi was having some fun swinging the bat wildly against Starc. Du Plessis reached 118 off 164 balls with 17 boundaries to ensure South Africa had their nose ahead.

South Africa will be slightly disappointed for not finding any wicket in the 12 overs of the Australian innings. None of their bowlers found enough movement off the wicket or the seam, and their spinner too did not look much of a threat. The attraction of the Australian innings was, however, the debutant Matt Renshaw, who batted well to remain not out when the stumps were drawn.

Australia reached 14 for no loss after 12 overs, trailing by 245 runs in the first innings. Renshaw was on 8 not out, accompanied by Usman Khawaja on 3, who was promoted up in the opening slot since David Warner suffered a shoulder injury.

For Australia, it will be important to get close to the South African total. The pitch at the Adelaide Oval has no grass cover, and du Plessis knock showed that if a batsman is ready to apply himself, he can get runs. Renshaw and the other two Australian debutants Peter Handscomb and Nic Maddinson will continue to remain in focus along with the other senior cricketers under pressure to save face.

South Africa, on the other hand, will want to take a big lead in the first innings. But their bowlers have not got enough purchase off the wicket. And if Australia bat well in their first essay, the contest is on. 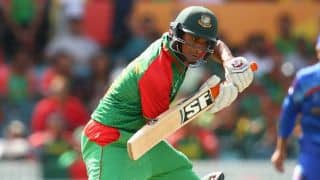 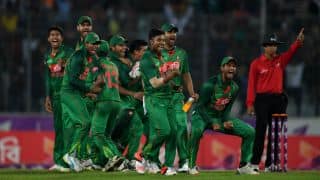