Surprisingly, with everything stacked up against them, Smith and team rediscovered inspiration.

No other Test side has been through as much turmoil as Steven Smith s Australia in the recent times. They were hammered in Sri Lanka, humiliated at WACA, and massacred at Hobart. It was tough to take a call on what Australia could do better: score runs or take wickets. Calls for restoring pride were made long back; Smith s team had failed to save any. Many players were let go, and Australia entered the game facing the threat of being the first side that could lose all three Tests at home in a series. FULL CRICKET SCORECARD: Australia vs South Africa, 3rd Test at Adelaide

Surprisingly, with everything stacked up against them, Smith and team rediscovered inspiration. It is not the case that the infusion of young blood Matt Renshaw, Peter Handscomb and Nic Maddinson made a massive difference. But one of those from the faltering sides stood up and said enough is enough. Usman Khawaja had never opened in Test cricket; his First-Class average was just above 12 as an opener. He was asked to pad-up and fill in for David Warner. What transpired was not just one of the finest knocks in recent times, but certainly, the grittiest in most adverse situations.

Give it a thought: had Khawaja not made 145 in Australia s first innings, we might have seen the last of him as well for some time to come. But the left-hander dug in, and eked out a century which not only infused confidence back in the faltering batsmen of Australia but also inspired others to make runs. Steven Smith, Handscomb and Mitchell Starc responded with crucial fifties, and for the first time in many innings, Australia posted a total close to 400.

With the ball, Australia impressed. Nathan Lyon remained wicketless for close to 100 overs in First-Class cricket but he walked away with 3 wickets on the third day. Starc has been Australia s best bowler, and his contribution of 2 wickets in the second innings helped the hosts restrict the high-flying touring side to 194 for 6 with a slender lead of 70.

South Africa s decision to declare at 259 for 9 in the first innings thus looks a wrong one. Australia took a lead of 124 runs, and having removed the major chunk of the South African batting, they are slowly but steadily moving towards a positive result.

In order to achieve that, Australia will have to snaffle the remaining four wickets of South Africa without conceding a lot. Stephen Cook has been the lone fighter in their second innings, and how much Quinton de Kock responds under pressure is something that remains to be seen. The pair of Cook and de Kock is the last recognised batting combination that South Africa have, and unless their second innings lead does not surge past 150 from 70 (which is at present), the tourists will remain in a spot of bother.

For South Africa, it has been a game in which they have been outplayed. If the first innings century from their captain Faf du Plessis is taken out, the tourists have actually turned up complacent and now find themselves under a lot of pressure. On the other hand, the Australians deserve rich praise for showing character and grit, and posing a lot of challenges to South Africa. It is something which was unexpected, following their spineless performances in the first two Tests of this series.

Australia will fancy a win from this position, but for that they will need an early wicket on the fourth day morning. On the other hand, South Africa will want Cook to keep his anchor dropped and de Kock to come up with a rapid knock which changes the equations. 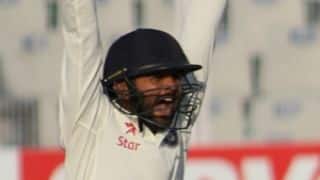