Steven Smith and his refurbished Australia team face the challenge of preventing a rampant South Africa from achieving something which no cricket team has done in almost 13 decades.

Never since 1887-88 have Australia have lost every single Test of their home series. In fact, they have never been whitewashed in a home series of 3 or more Test. But, having produced two sub-par (and that is being polite) performances, Steven Smith and his refurbished team face the challenge of preventing a rampant South Africa from achieving something which no cricket team has done in almost 13 decades. South Africa have been at the top of their game, but their domination in this series so far has been greatly assisted by a horrendous show by the hosts, who have brought in many new faces to arrest the slide and somehow prevent the ignominy looming large. LIVE CRICKET SCORECARD: Australia vs South Africa, third Test, Day One at Adelaide

Matthew Renshaw, Nic Maddinson and Peter Handscomb have not been as lucky as some of their predecessors. Some of the former Australian debutants like Michael Clarke and even Smith and David Warner came on to the scene with the national side being in perfect health. But as these three promising batsmen gear up to debut, they find the Australian team ravaged by a string of defeats and a broken cricket system taking the sheen completely off their first international game. Matthew Wade and Jackson Bird have also found places in the playing XI, but it remains to be seen if Trevor Hohns has actually infused some life into a faltering team.

While Renshaw will open with Warner, Handscomb is likely to come in at No. 5 after Smith, and Maddinson will follow in at No. 6. The aggressive Wade, whose wicketkeeping is not considered as clean as Peter Nevill s, will be entrusted to provide this young side some support from behind the wickets with his verbal skills. However, none of this promises a victory for Australia, and achieving a draw will be considered a result as good as a victory in the present circumstances.

Chadd Sayers will be the 12th man, and Bird will finally feel vindicated after toiling for months to find a place in the side. Both Sayers and Bird are identical bowlers: they can move the ball around and work up some amount of pace. But then, will it be enough to address the slide?

Mitchell Starc, Josh Hazlewood and Nathan Lyon are the three men bestowed with the responsibility to take the bowling attack ahead. So far, they have failed to match their South African counterparts, and to expect the troika to put aside the horrors of the last two Tests and spark some inspirational performances will be asking for a lot. All three of these bowlers have been excellent in individual capacities, but hunting in packs is a thing of bygone era.

On the other hand, the touring South African party has ensured that it remained stuck to the script. The South Africans wanted to unsettle the Australian leadership in Smith and Warner, but of late, they have been attending press meets in groups, shining cricket balls with lollies, pushing around media personnel at airports and have been doing everything to make sure they remain on the top.

This South African side has caused great intimidation in the minds of the Australians (remember Hobart?) and only time will heal the wounds that have caused profound crevices.

They will be happy to have Faf du Plessis available for the Adelaide Test. The South African captain has been at the centre of attraction, and despite leading his side to a possible clean sweep over Australia in Australia, he has no big reward in waiting. Lacking runs, du Plessis has the opportunity of ending the tour on a personal high as well.

Amid the commotion which has Australia running to their depths to pull off some magic and South Africa using every incident on this tour to inspire them, there is a fact which the cricketing world has not yet acknowledged.

South Africa were not ready to play a day-night Test on this tour. They had their own reservations and lack of practice with the pink cricket ball was one of the biggest concerns going into this series. However, with the series already in their bag, South Africa will feel far more comfortable than they did when the idea arrived in their front of playing a pink ball match in Australia.

The hosts, who played the first-ever day-night Test at this very venue will feel they have slight edge over their opponents. Smith, Warner, Starc and Hazlewood had all played in the inaugural day-night Test. The requisite experience Australia have in their ranks will give them confidence going into the clash; but then, having lost 5 of their last Tests, the team is under some serious pressure and the tourists would like to use this as well to their benefit.

For some inexplicable reason there was a thick grass cover on the wicket at the Bellerive Oval in Hobart. Following their horrible show in both the innings, there are reports suggesting that the Adelaide Oval usually one of the best wickets for overseas batsmen in Australia will not have the grass cover at all. Once again, even though the conditions are conducive for run-scoring, how much Australians are able to use it to their advantage.

South Africa look strong. In Quinton de Kock they have the finest young batsman in the world. Vernon Philander, Kagiso Rabada and Kyle Abbott form an exceptional fast-bowling combination, while Keshav Maharaj has shown promise. The batting may not have clicked, but their bowling has more than made up to it. There is no doubt that they will take field as favourites.

Australia s pride was at stake when they entered this series, but following a defeat at Perth, all that was left to save was in Hobart. But Australia lost that opportunity too and entered a phase once again wherein they can be described being in rebuilding. However, a draw, or a miraculous win at Adelaide will certainly restore some pride and set them up well for the series against Pakistan. To achieve that, Australia will have to let go of the inhibitions and play the way the previous sides have without fear. 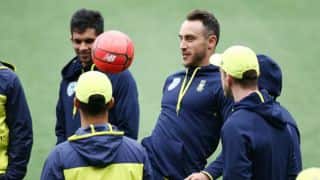