Adam Voges might average 73 in Test cricket, but former Australian opener Chris Rogers believes that the batsman is just two bad matches away from being axed from the squad.

Melbourne [Australia] (ANI): Adam Voges might average 73 in Test cricket, but former Australian opener Chris Rogers believes that the batsman is just two bad matches away from being axed from the squad. Rogers, in his recently-released book Bucking the Trend , insisted that Voges would face added pressure as a 37-year-old in the Australian team. Although Rogers didn t deny that Australia would be ruthless with Voges, he insisted that the team would be much stronger if the No.5 could earn the right to stay alive for this summer. Well aware of the mental pressure that comes with having Father Time banging on the door, the former Middlesex batsman admitted that it was a cursed existence which both spurred him on as well as ground him down at the same time. FULL CRICKET SCORECARD: Australia vs South Africa, 1st Test at WACA, Perth

It s a difficult one. He ll know that it s only a couple of bad Test matches away and he could be left out, Rogers was quoted, as saying by news.com.au. Hopefully, he does well because the side still needs some leadership.There s not a heap of guys who have played a lot of cricket and that kind of stuff is very important for a side and he ll bring more than just his batting and fielding, he said. READ: Australia vs South Africa: Peter Siddle’s open challenge to Faf du Plessis

I think everyone is desperate to see him do well, Rogers added. I probably didn t enjoy it, but equally it spurred me on.I quite liked having my back to the wall for some reason and knowing you had to perform. But in saying that it drains you and you don t quite perhaps enjoy it as much as you should be.It might be different for Adam hopefully he ll go out and deliver, said Rogers while unveiling the details in his book about his extraordinary late-in-life Test career. 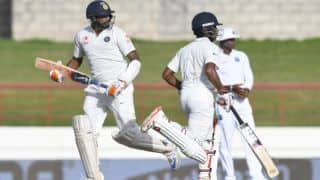