South Africa resumed their play post Tea at 89 for 3 on Day One against Australia at Adelaide Oval in Adelaide.

Josh Hazlewood and his love for pink-ball was witnessed once again as he kept South Africa under check at 165 for 7 on Day One of The Adelaide Oval in Adelaide. Hazlewood, who got two wickets of JP Duminy and Hashim Amla in the first session, added two more wickets of Vernon Philander and Quinton de Kock, rattling visitors further. Mitchell Starc also picked his second wicket of Stephen Cook thereby ending the healthy partnership between du Plessis and Cook. Meanwhile, du Plessis is playing at 65 and hopeful to turn around the fortunes for South Africa in the final session of the day’s play. The tail-enders made their way into the crease with the entry of Kyle Abbott. Proteas have headed for Dinner with partnership of 4 so far. LIVE CRICKET SCORECARD: Australia vs South Africa, third Test, Day One at Adelaide

Cook and du Plessis resumed second session at 89 for 3. The fourth wicket stand that started off with 45 runs between du Plessis and Cook surged to 51, buulding the highest partnership of this innings so far. The game that belonged to South Africa for a moment, tilted towards Australia with Starc finally picking Cook for 40 and Steven Smith grabbing it at the slip. Bavuma, who is known to be resilient in precarious condition, was seen stuttering against the Australian bowlers and finally was grabbed by Jackson Bird. De Kock was the only hope for captain du Plessis at the non-strikers end.

He was off the mark with de Kock getting just one boundary while du Plessis continued his dream-run, shutting the critics with his 9th Test fifty. De Kock and du Plessis built steady partnership of 32 runs until Australian bowlers were thirsty for more. De Kock was dismissed with yet another top dismissal by Hazlewood reaching his third wicket for the day. It all fell over the captain s shoulder and du Plessis had to carry forward with the boundaries and took Starc for a roll with back-to-back boundaries. ALSO READ: Tea Report: Australian bowlers limit Proteas to 89/3

This time du Plessis was in a desperate need of a partner to save the Proteas from the deep trouble they were heading for. Vernon Philander entered and Hazlewood continued to wrack havoc against the Proteas getting his fourth wicket that kissed Philander s inside edge, brushing the thigh pad.

In the first session, Cook profited from an early reprieve to lead a South Africa fightback after the loss of three wickets. Cook had a major let-off on four, when he was struck on the back pad by Starc and given out leg before wicket in the day’s third over. Cook went on to end the first session unbeaten on 40 with skipper du Plessis not out 26. The tourists were 89 for three after winning the toss. Du Plessis was booed by the crowd as he walked out to bat, following a ball-tampering incident for which he was found guilty and fined, but cleared to play in the match.

Starc recovered from his blunder when he enticed a thick edge from Dean Elgar to Usman Khawaja at third slip for five. English-born debutant Matt Renshaw then took his first Test catch to dismiss Hashim Amla for five off Josh Hazlewood. The 20-year-old opener snapped up an ankle-high catch at first slip to claim the big scalp of Amla and leave the tourists at 36 for two in the 13th over. Hazlewood struck again in the over after drinks, coaxing an inside edge off JP Duminy to give recalled wicketkeeper Matthew Wade a catch for five as the tourists slumped to 44 for three.

Australia are fighting off the threat of their sixth straight Test defeat, after losing 3-0 in Sri Lanka in July and August. They are also on the brink of their first-ever home Test series whitewash. 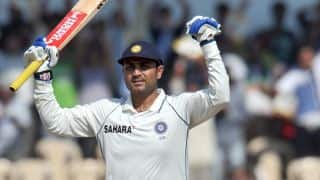