Australia began Day Two at 14 for no loss against South Africa in the final Test at Adelaide Oval in Adelaide.

Australia found harmony as Usman Khawaja’s fifty kept hosts in hunt against South Africa. Australia went to the tea break at 109 for 2, trailing by 150 runs on Day Two at Adelaide Oval in Adelaide. South Africa did have their share of laugh as Kyle Abbott struck twice and nabbed the opening batsman Matt Renshaw and Australia’s new No. 3 batsman David Warner for 11. It was Dean Elgar’s lucky day as he grabbed both the catches at the third slip. However, captain Steven Smith and Khawaja looked at ease adding 72 runs on the board. South Africa skipper Faf du Plessis tried various combinations including spinner Tabraiz Shamsi as well. But Australia held fort with Khawaja and Smith going to the break at 58 and 23 respectively. FULL CRICKET SCORECARD: Australia vs South Africa, third Test, Day One at Adelaide

After declaring for 259 for 9, Australia were put to bat for the remaining 12 overs on Day One. Khawaja and Renshaw went steady adding 14 runs on board at the end of the day. On Day Two, South Africa were itching to break the steady stand between Renshaw and Khawaja. Adding another 5 runs on board, Proteas pacer Abbott was spot on and Elgar s athletic skills came handy at the third slip picking the debutant Renshaw. Considering the field umpires decided to take third umpire referral, Aleem Dar rightly ruled it in favour of the visitors. That was the first wicket for South Africa.

Warner entered at an unusual position of No. 3 after as he was forced to come on field late due to his shoulder treatment. Knowing that Warner will be entering the field late, South Africa skipper Faf du Plessis took the advantage and decided to declare soon to add pressure on hosts at twilight on Day One. Warner and Khawaja also witnessed stable flow of runs coming their way until Abbott and Elgar decided to be party spoilers. Once again an edge and Warner was caught by Elgar at the third slip. Warner managed only 11. Warner tried to go ahead with an aggressive approach but did not receive any boundaries at the end of his innings. ALSO READ: Faf du Plessis battle with storm sums up the day

Khawaja, however, exhibited similar form that he did at Hobart and was looking for a companion to build a firm partnership that Australia were vouching for. Just then captain Smith provided the perfect harmony to Khawaja. He started off with the ones and twos. He then smacked Rabada all the way towards square-leg fence for a six. Khawaja, meanwhile, maintained his composure and kept the boundaries coming as he raced to his sixth Test fifty. He has scored 7 fours since the beginning of the innings while Smith added a four and a six in this so far.

On Day One, the game was split into two halves with the first half belonging to Australian bowlers as Mitchell Starc, Jackson Bird bagged two wickets apiece while Josh Hazlewood ended up with figures of 4 for 68, proving his love for the pink-ball. But the game saw a different tangent during the final session as du Plessis thumped his authority with his 6th Test century and also completing 2,000 Test runs. He also found partners. He shared 50 runs each along with Stephen Cook, Abbott and the miraculous partnership with Shamsi adding the much needed 39 runs.

South Africa won the toss and elected to bat. The visitors made just a single change bringing debutant chinaman bowler Shamsi while Australia added three new players to their side with Nic Maddinson, Peter Handscomb and Renshaw. The last time Australia made several changes in the top-six was during the Second World War. 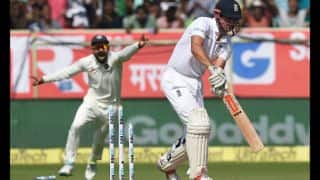