The live telecast of Day 3 the day-night Test between Australia & South Africa is available on Star Sports 2 and Star Sports HD2.

Australia will resume batting on Day 3 with their overnight score of 307 for 6, lead standing at 48 runs. Both the Australian openers had done well till at stumps on Day 1 but it was Usman Khawaja’s century which led Australia to a strong position. South Africa posted 259 for 9 declared in their first innings but their bowlers’ efforts were overshadowed by a much better performance by hosts’ batsmen. The live cricket streaming of the pink-ball Test is available on Hotstar. The live telecast of the day-night Test is available on Star Sports 2 and Star Sports HD2. Earlier, stand-in skipper Faf du Plessis had scored a magnificent ton to steal the thunder on opening day of the third day-night Test in cricketing history. LIVE CRICKET SCORECARD: Australia vs South Africa, Day-Night Test at Adelaide

South Africa won the toss and elected to bat first on Day One. Their top-order crumbled only contributions came in form of starts by Stephen Cook, Quinton de Kock and Kyle Abbott who batted for sometime with in-form du Plessis. On Day Two, South Africa picked up early wickets but their progress was overshadowed by Khawaja’s gritty anf patient 138 not out stitched with 12 boundaries. Steven Smith and debutant, Peter Handscomb chipped in with valiant fifties to rescue Australia’s ship after early wickets.

South Africa still managed to chip in with quick wickets later in the evening but the unbeaten pair of Khawaja and Mitchell Starc have added 25 since then. They will like to stretch their side’s lead before Proteas come out to bat. 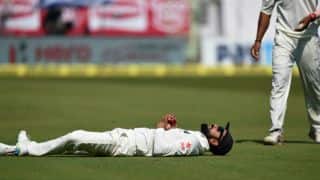