Catch Live updates of the Under-19 World Cup semi-final here.

South Africa are through to the finals of Under-19 World Cup. James Bazley was dismissed by Yasin Valli and Rabada finished off with a six-for.

Toss: News from the centre is that the South African team has won the toss and elected to bat in the semi-final. Once again, team winning the toiss has decided to bat. But the -last few matches have indicated that it has been disastrous for the batting team early on.

Hello and welcome to the live updates of the ICC Under-19 World Cup semi-final between Australia and South Africa. I am Abhijit Banare and I will be bringing the live updates of the match here. After Pakistan qualified with a nail-biting win over England on Monday, it’s upto these two teams to decide who qualifies for the final.

Bring a 12 PM start, one wonders what the captains would chose to do. There was no sign of dew in the evening during the semi-final between England and Pakistan. Thus, bowlers shouldn’t find it tough to grip in the evening. Moreover, the teams winning the toss and batting first have lost the last three games at Dubai. Runs have been hard to come by after taking it first up and although teams would want to put them on the board in the knockouts, this is a tough one at Dubai. Catch the Preview of the match here. 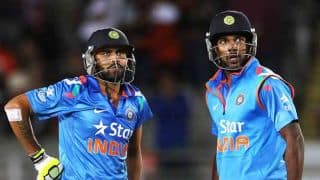