While Mitchell Starc and Usman Khawaja are not really enjoying a lot of success on the field, Australian coach Justin Langer on Monday dismissed concerns on the two s form even as the criticism continues to mount.

Although Starc remains Australia s opening bowler, he has not been in a good form recently including during the Test series against India and then in the first Test against Sri Lanka at the Gabba. The wickets have not come in plenty. (ALSO READ: Picking Kurtis Patterson ‘was a common-sense decision’ Justin Langer)

Khawaja too has struggled and did not score heavily in the four-match Test series India and could score only 11 as Australia sealed an innings and 40-run win against Sri Lanka last week. Langer, however, came out in their support as Australia gear up for the second Test against Sri Lanka.

There s a lot of talk about Mitchell Starc but in a game like this when you ve got a guy like Jhye Richardson, Pat Cummins bowling fast outswingers, good bouncer, to have that left-arm option (is vital), Langer was quoted as saying by Fox Sports. (ALSO READ: Pat Cummins is Australia’s highest-ranked bowler in five years)

He just got his 200th Test wicket remember, so 200 Test wickets, that s rare company, said Langer before adding, I suppose there s high expectation on him but he s a very good player and is really important for our team.

In the similar vein, Langer defended Khawaja, who has failed to score big following his UAE rearguard of 141 against Pakistan.

He s our most experienced player. He s very calm. He brings a lot of calmness and composure and experience to the group, so we re happy with the way he s going at the moment.

The Australian coach also indicated that there will be a delay to announce the Australian squad for the upcoming Ashes in England. Langer said that it will be done to give Test aspirants a chance to prove their credentials during the Australia A tour which takes place before the Ashes.

“We probably won’t pick the final Ashes squad until quite late,” Langer was quoted as saying by stuff.co.nz. “I hope I’m not talking out of school with the other selectors, but I can’t see us picking the Ashes [squad] before the Australia A tour, added Langer.

“There will be some really good opportunities for the guys who are picked for Australia A while the World Cup is on to put their hand up, concluded Langer. 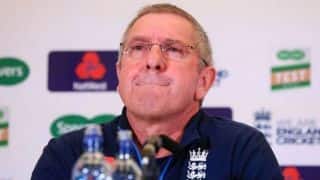