Australia have named an unchanged playing XI for the second Test against Sri Lanka which gets underway from Friday.

Australia have named an unchanged playing XI for the second Test against Sri Lanka which gets underway from Friday.

The selectors have kept faith in the XI that blew away the tourists in Brisbane to win by an innings and 40 runs with Pat Cummins taking a career-best 6/23 in the second innings.

Allrounder Marcus Stoinis, who was added to the squad for the second and final match of series, will have to wait for some more time to get a taste of Test cricket.

Justin Langer went with his ‘gut feeling’ as he decided against tinkering with the winning combination. “My inkling and gut feeling is it s always nice to keep the same XI after you ve had a win” Langer told SEN.

While Australia have announced their playing XI, Sri Lanka captain Dinesh Chandimal will wait till the toss before revealing his team.

The series decider will be played at Manuka Oval in Canberra which is to host its maiden Test. 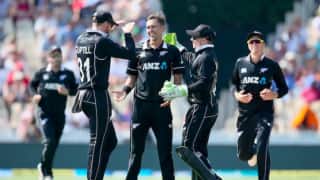